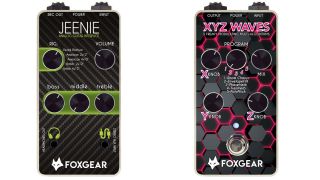 The pedal is based on a proprietary circuit Foxgear calls ADEQ – a 20 band analog active EQ section that is digitally controlled to create five different presets of amp/cab/mic complete simulation.

Pedals can be connected in front of the Jeenie, and backing tracks can be run through the unit via the aux in.