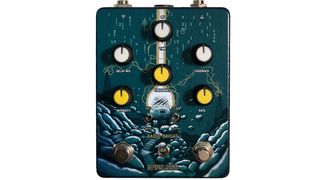 Deep Space Devices, just by virtue of its name, conjures fantastical mental images of what lies beyond our world. Those who enjoy that imagery will be all too happy to hear that the company's new effect pedal, the Radio-Bright, really leans into it.

If the company's name, and the pedal's beautiful artwork, weren't cosmic enough for you already, the Radio-Bright comes with a hell of a backstory as well.

The pedal was inspired by the so-called Wow! Signal, a signal - originating near the Sagittarius constellation - that was picked up by researchers at Ohio State University in 1977. Unexplained to this day, the signal is often used by UFO devotees as proof of intelligent life outside of Earth.

In less far-out matters, the Radio-Bright features two footswitches - one to turn the effect on and off and one to turn up delay feedback - and two toggle switches, plus three knobs to control delay and three knobs for ring modulation.

The Deep Space Devices Radio-Bright pedal will be available starting October 15 for $199. For more info on the pedal, head on over to deepspacedevices.com.