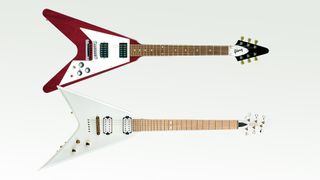 Ever since Gibson’s notorious Play Authentic video and well-publicized lawsuit against Dean, guitarists have been wondering whether any other firms will face off against one of the world’s biggest guitar companies - and it seems Kiesel is next to go head-to-head.

In a video published on the brand’s Instagram channel, Vice-President Jeff Kiesel revealed that the company had recently received a cease-and-desist letter from Gibson regarding Kiesel’s Ultra-V model and apparent similarities to the Flying V.

Kiesel goes on to claim that, “their trademark was fulfilled in 1995; our model came out [under the Carvin name] in 1986.”

Kiesel continues, “I named the Ultra V, so I think it was about ’86 when it came out - I was seven years old, so it’s a really special model to me.

“To have those bozos try to tell us we can’t make it any more when it looks literally nothing like it... I mean, come on guys, look at the pointed body, look at the bevel on it: does that look anything like their V?”

It’s worth noting that Gibson had its Flying V trademark appeal rejected in an EU court last July. It remains to be seen how it fares in the US.

Kiesel later spoke to The Guitologist YouTube channel, where he revealed that Gibson has also issued a cease and desist over the company’s CS6 California Single, which was released in 2006.

As Kiesel notes, the California Single was launched following the ruling in the landmark 2005 PRS vs Gibson case, which saw a victory for PRS and its Singlecut design.

As for what the company does next, Kiesel is undaunted.

“We have to give a letter back to them, but we’ll let them know that, ‘Hey, if you need to go ahead and sue us, that’s okay,’ he explains.

“It’s not a battle they’re going to win, and we’re not gonna back down. Because, at the end of the day, we have logic and facts behind us; they have nothing.”