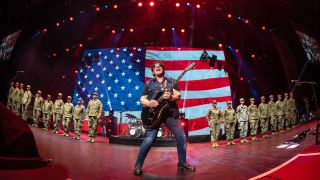 Whether it’s with Santana, Journey or his own solo material, Neal Schon has spent over 50 years delivering some of the most melodic guitar playing on planet Earth - and it’s fair to say he’s amassed a fair few famous friends along the way, many of whom have lined up to wish the guitarist a very happy birthday.

But you’ve never seen a birthday message quite like this one. To celebrate his 66th (which takes place on February 27), some of the very biggest names in guitar - and music in general - have banded together to send their best wishes to the Rock and Roll Hall of Famer, including the likes of Slash, Rick Nielsen, Steve Vai, and even Dolly Parton.

Particular six-string highlights include a funky performance from John McLaughlin; KISS’s Paul Stanley revealing what he loves about Schon’s playing; Joe Satriani playing a very Joe Satriani take on happy birthday; and Chris Jericho, who generously donates a song he believes will be bigger than Don’t Stop Believin’ (good luck with that).

Genuinely heart-warming. As Michaele Schon puts it, “My husband Neal is my heart, and all his friends who love him so much respond with genuine joy and love of Neal!”