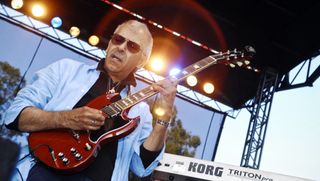 Jorge Santana, Carlos Santana’s younger brother, has died at the age of 68.

“We take time to celebrate the magnificent spirit of our beloved brother Jorge,” Carlos wrote.

“He transitioned unto the realm of light that cast no shadow. [T]he eyes of my heart clearly see him right in between our glorious and magnificent mother Josefina and our father Jose. They are caressing his face and kissing his hands showering him with Light and Love.

“We love, cherish and honor your soul MEMO."

In the 1970s Santana played in the Latin rock and blues band Malo, who had a hit with 1972’s Suavecito.

He later played with the Fania All-Stars and in the late ‘70s released two solo albums.

In the ‘90s he played professionally with his brother, and can be heard on the 1993 live album Sacred Fire: Live in South America, as well as the 1994 studio effort Santana Brothers, a collaboration between Jorge, Carlos and Carlos’ nephew Carlos Hernandez.