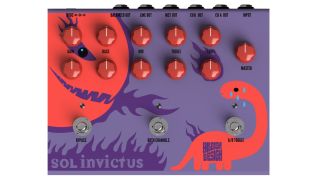 The dual-channel preamp is based on Hilbish’s betaPREAMP, modeled on the classic SUNN Beta Lead and Bass amp. The two channels can be run independently or in parallel, and each channel features drive and level controls and an active three-band EQ.

When used as a preamp, the pedal can be plugged into any line level source, including a power amp, effects return on a guitar/bass amp or mixing console.

As a Bi-Amp rig, the individual channel outputs can be run into a stereo power amp. The instrument level output, meanwhile, turns the Sol Invictus into a drive pedal, with easily accessible overdrive, distortion and fuzz tones.

The Sol Invictus is available for pre-order for $350. To pick one up, head to Hilbish Design.