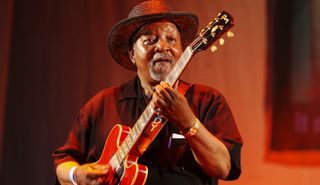 Jody Williams, a famed Chicago blues guitarist and Blues Hall of Fame member, has died at the age of 83. Williams succumbed to cancer at the at the Munster Med Inn in Munster, Indiana Saturday night, according to a statement from Alligator Records.

Williams—known for a six-string style that evoked sophisticated, jazzy West Coast sounds and deep blues, with a touch of rockabilly for good measure—played on famed sides like Bo Diddley's "Who Do You Love" and "I’m Bad," Howlin’ Wolf’s "Evil" and "Forty Four" and Sonny Boy Williamson’s "Don’t Start Me Talking."

Williams was born in Mobile, Alabama in 1935 and moved to Chicago with his family at the age of five. He began performing at clubs at the age of 17, and within a few years became the house guitarist at Chess Records, a role he served in until he was called into the army in 1958.

Though he had backed a varied list of artists including Jimmy Witherspoon, Floyd Dixon, Dale Hawkins and Bobby Charles during his time at Chess, Williams left the music industry after returning to Chicago in 1960. He would only return in 2000, recording the well-received albums Return Of A Legend (in 2002) and You Left Me In the Dark (in 2004.)