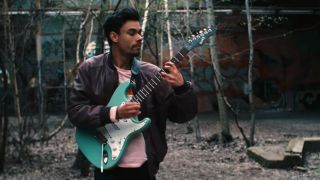 Recently, the guitar world was rocked by allegations that prominent Instagram guitarists were “faking” their technique - that it was so quick and so clean, it was impossible to play. Now, one of the social media platform’s most prominent players has proven the doubters wrong.

Percussive and harmonic guitar guru Manuel Gardner Fernandes - who was personally called out by Jared Dines in his video on the subject - issued his own response, where he set the record straight.

“At this point, I need to clarify some stuff as there’s been a lot of bad things going on with my name and my face all over the internet,” says Fernandes, a guitarist GW earlier this year dubbed one of 10 forward-thinking players that prove the guitar still has plenty to offer.

“I have indeed edited and pre-recorded some of my videos. Not because I’m unable to perform my ideas, but to give you the music in the best quality and to add an extra 2% of perfection to it.

“That being said, there was NEVER only one single video that has been sped up. I know some clips might look odd, but it really comes down to the fact that I’m recording just with my phone on auto mode. I have no other suggestion as to what caused the confusion here.

“I really hope that I haven’t let anyone down and that some of you will still follow me on my journey as a musician. Me and my band are more than just motivated to make big things happen in the future and to get guitar-centred music in a better place on a broad scale.”

Fernandes’s statement was followed by a series of undeniable performance clips, shot while out on tour with his metal band Unprocessed, who were supporting Heart of a Coward.

There’s likely to be some controversy over the fact that the audio for these clips has been pre-recorded - but with Instagram essentially serving as the new medium for bite-sized music videos, is playing to a pre-recorded audio track really a problem, as long as you’re honest about it?

Like miming to big-budget videos on MTV, these clips are designed to raise an artist’s profile and serve as a demonstration of their talents - something MFG clearly has in spades.

Guitar World has reached out to Fernandes for further comment. Until then, enjoy these awe-inspiring clips, which well and truly prove the haters wrong.