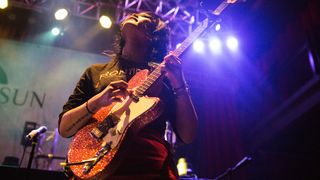 Best of 2019: Earlier this week, Pete Townshend claimed today’s players - particularly those on YouTube and Instagram - have “literally exhausted the possibilities of the guitar” - he may be a legend, but there’s no way we’re taking his word as gospel.

In response to the Who guitarist, we’ve rounded up 10 electric guitar players who are taking the instrument into new and exciting arenas.

There are common themes among these guitarists: as with the rise of high-gain in the ’80s, technology is paving the way for new thinking.

Effects and amp modeling play a large part in creating these new sounds, but so does technique: more ergonomic electric guitar designs afford players the ability to bring percussive and tapping-led styles to the forefront, echoing movements made in acoustic guitar over recent years.

As these social media-savvy guitarists rise in stature, their influence will be felt by a whole new generation of players, who can expand on their approaches and take them further still.

Trust us, Pete: stick these players on, and you’ll see that the kids are very much all right…

In a surprising example of six-string synergy, Polyphia’s hook-writer-in-chief Tim Henson said he hopes “guitar music dies a painful death”. However, in contrast to Townshend’s view that the instrument’s prospects have been exhausted, Henson wants to take the instrument far beyond what he considers the cliched arena of guitar rock.

In partnership with fellow Ibanez virtuoso Scott LePage, that’s exactly what the band are doing, fusing the best aspects of hip-hop, trap and rap music with unfathomable technique. Accordingly, it’s won them the broadest fanbases of any shred guitar band ever. Long may their rise continue.

Yvette Young took her piano background and transposed it directly to the guitar, shaping many of Covet’s progressive-meets-emo hooks around a two-handed approach.

In recent years, Young’s increased use of effects has taken the trio’s sound to new heights, in combination with her trademark Ibanez Talman/Strandberg and Vox AC30 rig. We predict even greater things from this trailblazing fingerstyle player.

This Japanese Ibanez and Dingwall endorsee has such a lightning-quick technique that some internet commentators have speculated his videos are sped up, but Ichika is the real deal.

There’s clearly a touch of the Polyphias in his playing, but his solo-guitar approach displays a more overt jazz and pop influence that produces some seriously contagious earworms.

One of Instagram’s foremost guitar stars is this Germany-based percussive player, who uses harmonics and tapping to jaw-dropping effect.

Again, this is solo guitar taken to new and hugely emotive places, but Fernandes doesn’t limit himself to one style - check out his crushing eight-string playing with German metallers Unprocessed for proof.

One of this generation’s premier YouTubers, Sarah Longfield’s career has seen her graduate from djent playthroughs to soundtrack-esque atmospheric jams.

Throughout, Longfield utilizes her formidable tapping chops along with a bevy of synth effects to create guitar-based music that doesn’t sound quite like anything else.

What many of today’s forward-thinking players have in common is a canny ability to fuse multiple genres, and that’s exactly what 2019’s Guitarist of the Year Dylan Reavey achieves with videogame music and, erm, fusion.

The Australian Strandberg endorsee takes the unpredictability and sense of fun embodied by Frank Zappa’s best material and teams with the studiousness of a Holdsworth-like approach to create compositions that are simultaneously challenging yet accessible.

The Surrealist, aka Roopam Garg, has three major things going for him:

We’d argue there are very few guitarists out there doing what Garg is doing. His playing marries the crescendos of post-rock with a hugely technical and rhythmically inventive fingerstyle approach that astonishes and soothes in equal measure.

Rather than turn to a collection of synths and plugins, Sarah Lipstate utilizes the electric guitar and an enviable collection of pedals as the tools with which she weaves her storied soundscapes.

Whether angular or ambient, her compositions are continually compelling, and rarely sound like a guitar, thanks to some astoundingly creative pedal use. It’s these skills that saw her recruited by Iggy Pop for his latest album, Free, released last month.

One of the fastest-rising guitar styles on Instagram is neo-soul, popularized by the likes of Mateus Asato, and Melanie Faye is one of its leading proponents, with a feel that’s rooted in Hendrix and Motown, but with licks that sound utterly contemporary - hence why she’s ended up playing with the likes of Mac DeMarco and Willow Smith.

As she says in a promo video for Fender’s Player Series Stratocaster, Faye is keen to encourage musicians who don’t play rock to play guitar, and if anything’s going to make that happen, it’s her impossibly smooth hybrid rhythm/lead style, which just oozes cool.

It wouldn’t be right to talk about the future of guitar without mentioning extended-range instruments, and few are quite so extended as Felix Martin’s 16-string, conjoined double-neck Kiesel.

But that instrument would mean nothing if it weren’t for two-hand tapping specialist Martin’s supreme sense of timing and melody, whether he’s deploying crushing guttural riffs or traditional Mexican melodies.