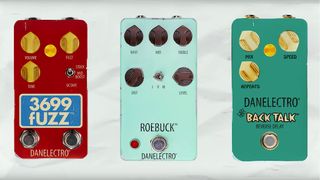 NAMM 2020: Danelectro is making big strides in the pedal arena once more this year with the launch of three stompboxes boasting highly sought-after circuits.

The 3699 Fuzz, Back Talk Reverse Delay and Roebuck Distortion are all based on classic designs: the Foxx Tone Machine (previously seen under the Dano badge as the French Toast); Dano’s own revered Back Talk; and the Ibanez MT10 MOSFET Distortion, respectively.

Dano president Steve Ridinger was the man behind the original Foxx Tone Machine, so it’s fitting to see him revamp the circuit for the present day; the 3699 promises a more pronounced, footswitchable octave, a “warmer” tone, and a mid-boost toggle, the latter of which is a particularly welcome addition.

The Back Talk, meanwhile, recreates Dano’s classic ’90s effect, with a tape-like reverse delay that’s not quite like any other.

The pedals were first revealed in JHS Pedals’ must-see interview with Dano president Steve Ridinger, which you can watch below.

All three will be available in the coming months, priced at $199 apiece - that's notably higher than Danelectro’s previous pedals, but these new incarnations do come with relic’d metal enclosures, metal jacks and true-bypass switching.

There’s no info on Danelectro’s official site yet, so you’ll have to visit Sweetwater for more on these for now.