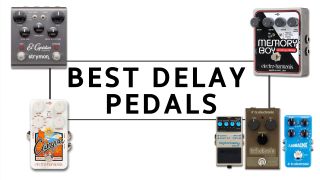 Whether you're looking to buy your first delay pedal or your 15th, there are few effects that are as fun, inspiring or dynamic. For the uninitiated, delays create an echo or repeat of your guitar sound and are commonly used by guitarists the world over including The Edge (U2) and Steve Vai. Before you buy one of the best delay pedals on this list, though, you should have a think about what kind of delay you're after.

Different types of delays not only offer a variety of options and functions, but in some cases radically different voicings and feels too. For such a creativity-boosting guitar effect, it's worth making sure that it gels well with your personality as a player, so that it can spark the most inspiration for you and your music.

Amazon Prime Day is just around the corner. If you're looking for a new delay pedal then it could be worth waiting until the Prime Day guitar deals start landing.

What is the best delay pedal you can buy right now?

If you want a no-frills analog delay that doesn't cost the earth, the TC Electronic Echobrain is the way to go. It's simple, sounds good, and even blends well with other delays and reverbs in case you later add more pedals to your board, or indeed if you are looking to add a delay pedal to your existing board. That said, the Electro-Harmonix Memory Boy and Boss DM-2W are worth it if your budget can stretch to them.

If you want a simple digital delay, then the Boss DD-3T is our recommendation. The DD-3 has been a staple for three decades for a reason, and the addition of tap-tempo just makes it even better.

For a bigger delay unit, it has to be either the Boss DD-500 or the Strymon Timeline. Without tweaking the stock sounds, our general feeling is that the Strymon patches are a little better voiced, and offer more instant gratification. On the options side, though, the DD-500 has comparable sound quality once dialed in, a great UI with lots of options, and some market-leading stereo and parallel settings once you've updated the firmware. It's also a little cheaper, so if we had to pick only one best delay pedal, we'd go with the DD-500.

How to choose the best delay pedal for you

Analog delays work by using a so-called Bucket Brigade chip, a capacitor array that gives them a distinctive dark sound that's increasingly lo-fi at longer delay settings. If you turn up the feedback, you'll find that these can be easily coerced into infinite feedback and auto-oscillation.

Digital delays are generally more pristine in timbre. Depending on who you ask, they might describe them as brighter or even clinical. Some, like the Boss DD-3, DD-5 and DD-6, have a distinctive tone of their own that sits somewhere between clinical and the darker, grungier tone of an analog delay.

Digital emulations of delays have become commonplace with modern signal processing, and it's not unusual to see larger delay units emulating not only classic analog delays, but also tape echoes and other delay types.

Finally, there's a somewhat more hazy group of digital delays that aren't trying to emulate other sounds, but instead do something radically new. They tend to be relatively niche, and it's a deep rabbit hole that we've written about elsewhere, but here we're thinking about pedals such as the Montreal Assembly Count to Five, the Catalinbread CSIDMAN, the Red Panda Particle and others.

If you've already got the basics covered, then a more out there delay could sark some needed inspiration in your rig.

These are the best delay pedals you can buy today

The Boss DD-3 has been the staple digital delay for 30 years, and the reason is no secret - it simply sounds amazing. Pristine delays, a pleasant overall timbre, and an EQ profile that works equally well in a band context or studio mix, make this a no-brainer for everybody from bedroom musicians to pros.

With the latest update, Boss has improved the base functionality of the DD-3 by adding a tap-tempo input, allowing you to use an external tap source to control the delay.

The Memory Boy is Electro-Harmonix's mid-range analog offering. As you'd expect from an analog delay, it's dark but characterful, giving a lush and organic delay sound. In terms of parameters, it's small but powerful, with modulation built in, and several modes to change the character of the modulation applied to the echoes.

It's not as immediately recognizable as the Boss or MXR analog delays, but the combination of value for money, extra options and excellent core tone make it a winner.

No frills, no downside

If you want the analog, BBD experience but don't want to pay a premium for the privilege, then the TC Echobrain is an excellent option.

Intuitive, robust build quality and no slouch in the sounds department, it's an ideal first delay or stacking delay for ambient soundscape use, for example; or for if you want another timbre of delay on your board and you already own a digital delay.

The original and best... reborn

£144
View at Bax-shop UK
£155
View at Amazon
£215.79
View at Amazon
Can be controlled by expression pedal
Great for experimentation
A classic, improved
Nada!

The Boss DM-2 and DM-3 analog delays are, quite simply, among the best-sounding delay pedals ever made. So it came as little surprise that one of Boss's first targets for its boutique Waza craft range was the DM-2.

With a glorious dark echo tone that works on record or live, and pairing excellently with other delays and drive pedals, the DM-2 is hours of fun, and can even be controlled via an expression pedal for added space-cadet madness.

Options galore and expressions, too

With a decent range of presets that cover all the basics - analog delay, tape echo, a pristine digital mode and some more sound effect-type delays, the TC Flashback 2 is an impressive piece of kit for the money.

In addition to the basic feature list, it has user presets assignable via TC's powerful Toneprint software, as well as a hardware expression pedal built in. That said, the expression, or mash functionality, can be a bit tricky to use in practice.

The sounds are solid, with a good range of user-tweakable options, and the delays themselves never stray into brittle territory, keeping a warm, organic timbre whatever the patch.

If money is no object...

The Strymon Timeline was the first big-box delay to offer truly studio-grade tone, with a range of excellent patches and signal processing that could go toe-to-toe with studio rack delay units.

The user interface is slick, with plenty of options accessible on the front panel, but it has to be said that firmware updates to some of its competitors have left it somewhat behind in power-user features that are accessible to the menu-diving obsessives on units such as the DD-500.

However, the bottom line is that if your main concern is the highest quality sounds possible, with the simplest interface, it's hard to argue against the Timeline.

With an array of patches covering everything from tape echo to shimmer and octave delays, the Electro-Harmonix Canyon is a solid choice if you want to cover a lot of ground.

The overall voicing feels less 'studio' and pristine than some of the other units on this list, but it's a lot of fun to use and works for its intended use - inspiring your creativity as a player.

There's an additional tap-in, as well as buttons on the top panel, meaning it's easy to dial in precise tempos on the fly with an external tap source.

The most versatile workhorse in the game

On release, the DD-500 even pipped the Strymon Timeline to the post in terms of raw audio quality - although it's debatable which has the better patches. The Boss unit's are endlessly tweakable, both on the pedal itself or via software on a computer, but the real gamechanger for it was its post-release firmware updates.

What does this mean in practice? Well, put simply, it means that the DD-500 can take the place of two pedals on your board; but it can also do shoegaze-heaven parallel delays panned left and right - ideal if you're running two amps, and for many other niche delay setups beside.

The king of tape emulations

£338.76
View at Amazon
Amazing tape emulation
Goes from clean to grimey
Not as cheap as others here

For the best tape-echo emulation on the market, Strymon may have bested themselves with the new Volante, but the smaller form factor and equally excellent sounds of the El Cap have us still recommending this over its bigger-box cousin.

With several different tape-head options to emulate classic tape-echo units, as well as controls for wow and flutter, and tape age, the El Cap can do everything from a very clean, forward-sounding tape echo for use in clean pop, to a much grimier, darker echo tone ideal for ambient and shoegaze.

With its gorgeous built-in modulation, the MXR Carbon Copy is a superbly distinctive- sounding pedal. Although it shines when used for a variety of different uses, it's probably most at home in the shoegaze, dream pop and ambient genres, even cropping up on a lot of post-rock guitarists' pedalboards.

As you'd expect, it's a heavy-hitter on its own, but it also stacks well with other delays and creates gorgeous pad-like echoes when put after a drive.

£196
View at Bax-shop UK
£482.06
View at Amazon
A great live tool
Looper and delay in one
A little dated
Can be unreliable

Although some of its delay patches are showing their age, as the original multi-function floor looper the DL4 still stacks up, allowing users to easily create and fire one-shot loops, stack loops, speed them up or manipulate them in other ways.

While other pedals here, like the DD-500 and the Strymon Timeline, sport powerful loopers, the DL4 is still arguably unsurpassed in terms of sheer ease of use and intuitively accessible features for live performance.

The only drawbacks are its large size and relative unreliability. However, if you're looking for a looper first, and a delay second, you'd be foolhardy not to at least consider the DL4.