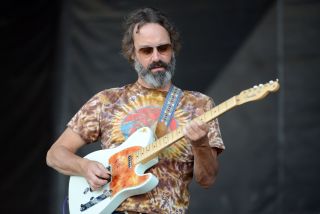 Guitarist Neal Casal, who played with Ryan Adams, Chris Robinson, Willie Nelson, Shooter Jennings and others, has died at age 50.

His passing was confirmed by an announcement on his social media feeds on Tuesday, August 27.

According to Pitchfork, a representative has since confirmed that the cause of death is suicide.

The announcement read in full:

“It’s with great sadness that we tell you our brother Neal Casal has passed away. As so many of you know, Neal was a gentle, introspective, deeply soulful human being who lived his life through artistry and kindness. His family, friends and fans will always remember him for the light that he brought to the world.

“Rest easy Neal, we love you.”

Casal was born in New Jersey and for more than three decades was a strong voice and in-demand collaborator for artists working in rock, blues, folk, jam, Americana and roots music.

Regarding his start as a guitarist, he told Guitar World in 2014, “I started playing when I was 12, and for me it was all about the Rolling Stones. They were the ones who first captured my imagination. Everything they were into provided me with many different roads to explore musically. The Stones really opened up the world for me and made me want to play.”

He continued, “All of those cliché things you hear about playing guitar - like locking yourself in a bedroom and playing until your fingers bleed - I went through. When I was 18, I started getting into bands like Free, Peter Green and some of the other English blues players. There was a sense of urgency coming from their hands that really appealed to me.”

Casal first gained notice as a member of Seventies southern rockers Blackfoot. He joined the band, led by current Lynyrd Skynyrd guitarist Rickey Medlocke, in 1988 and stayed with them until 1992.

Throughout the remainder of the Nineties and into the early 2000s Casal established himself as a songwriter and solo artist, releasing a series of albums, including his 1995 debut, Fade Away Diamond Time, and 2002’s Ran On Pure Lightning, a collaboration with Shannon McNalley.

He worked with bands like Hazy Malaze and Beachwood Sparks, but would find his greatest success in 2005 when he was drafted into Ryan Adams & the Cardinals.

Casal stayed with Adams through three albums and several world tours, before teaming up with former Black Crowes frontman Chris Robinson in the rock, blues and jam band outfit Chris Robinson Brotherhood, with whom he continued to play until his death.

“CRB is the most expansive band I've ever been in terms of freedom of expression in guitar playing,” Casal explained to Guitar World upon the release of the band’s 2014 album, Phosphorescent Harvest.

“Chris [Robinson] really encourages us to bring our adventurousness, personality and whimsical character into our playing. I got to really do my thing all over this record. It's a guitar player's dream.”

Throughout his career, Casal lent his unique rootsy guitar stylings and voice to a variety of artists, including Willie Nelson, Lucinda Williams, the Grateful Dead’s Phil Lesh, Smashing Pumpkins’ James Iha, the Jayhawks’ Mark Olson and others.

In more recent years, he started up another band, the Grateful Dead-adjacent Circles Around the Sun, as well as played with the Skiffle Players and Hard Working Americans, the latter a blues-rock supergroup featuring members of Widespread Panic.

Casal's collaborative tendencies extended to his very last performance, which took place on August 24 at the Lockn' Festival in Virginia, where he sat in with Oteil & Friends, which also featured Bob Weir, Devon Allman, Duane Betts and others alongside current Dead & Company bassist Oteil Burbridge.