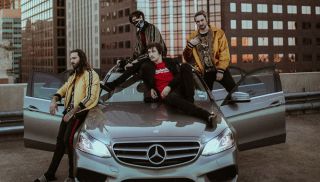 Polyphia have announced the Look But Don’t Touch tour, which kicks off April 1 in New Orleans and wraps May 5 in Dallas. Support on all shows will come from I the Mighty and Tides of Man.

In an interview with Guitar World, Polyphia guitarist Scott LePage discussed the band’s unique approach to their music: “The main goal for us is just to have fun,” Page explained. “We want to make music that sounds like the music we love, which is hip-hop and pop and all that stuff, and do it with the guitar. Tim’s [Tim Henson] main influences are Jimi Hendrix and stuff like that. And I’m super into Stevie Ray Vaughan. So we certainly have our pentatonic-scale guitar-player influences. And then we’re trying to put that together with the whole world of hip-hop and electronic-based music. Because we think both of those things are cool as fuck, you  New Orleans and wraps May 5 in Dallas. Support on all shows will come from I the Mighty and Tides of Man.

Check out all tour dates below. For more information or to purchase tickets, head over to Polyphia.com.