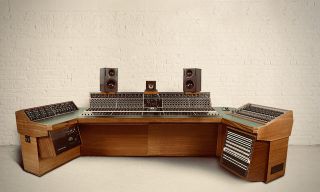 A HeliosCentric Helios Console, elements of which were used to record Led Zeppelin's IV, Bob Marley's Catch a Fire and Eric Clapton's "After Midnight," is heading to the auction block.

Elements of the console were housed at Island Records’ Basing Street Studio 2 between 1970 and 1974, a time where countless artists—Zeppelin, Clapton, Hendrix, Jeff Beck, Jimmy Cliff and The Rolling Stones are just a few examples—recorded some of their greatest works in the studio.

In 1986, the Island Records rig and Alvin Lee’s console from Space Studios were consolidated by Elvis Costello, Squeeze's Chris Difford and former Abbey Road employee Dick Swettenham into a "super console." That "super" console will go under the hammer at Bonham's on December 11.

Though the allure of owning such an amazing piece of rock history is incredibly enticing to most any guitarist, anyone interested is going to have to set aside a few pennies. The console is expected to fetch a six-figure sum.

For the full listing, head on over to bonhams.com.