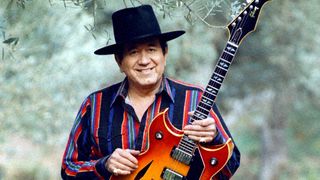 Guitarist, singer and actor Trini Lopez has died aged 83 of complications from COVID-19.

Lopez found fame in the ’60s for his versions of If I Had a Hammer and Lemon Tree, while as an actor he appeared in films including The Dirty Dozen.

In the guitar world, Lopez is also known for the two signature models he worked on with Gibson: the Trini Lopez Standard and Lopez Deluxe, which were produced from 1964 to 1971, with the Standard finding fame at the hands of Dave Grohl.

“Today the world sadly lost yet another legend, Trini Lopez,” Grohl posted on the Foo Fighters’ Twitter account. “Trini not only left a beautiful music legacy of his own, but also unknowingly helped shape the sound of the Foo Fighters.

“Every album we have ever made, from the first to the latest, was recorded with my red Trini Lopez signature guitar. It is the sound of our band, and my most prized possession from the day I bought it in 1992. Thank you, Trini for all of your contributions.”

Born in Dallas, Texas, Lopez was signed to Columbia with one of his early bands, The Big Beats, before switching to King Records for a solo career in the late-’50s.

The guitarist’s big break came when Frank Sinatra caught his set during a residency at Los Angeles club PJ’s, which led to his signing on Reprise Records - and subsequently, his Gibson signature models.

“I was playing a club in Chicago when Gibson approached me,” Lopez told Gibson in a 2011 interview. “I nearly fell off my chair. I always liked Gibson guitars. At that point, I was playing a Gibson Barney Kessel. He was an amazing jazz player, and a star to me because he’d backed Julie London on the hit Cry Me A River.

“I guess they’re not only fans of me as an artist, but they love the guitar. I’m not Dave Grohl’s biggest fan of course [laughs] but I’m definitely a fan. I’m just glad that people remember me.”

At the time of his death, Lopez had finished work on an all-new song, If By Now, intended to support food banks during the pandemic.