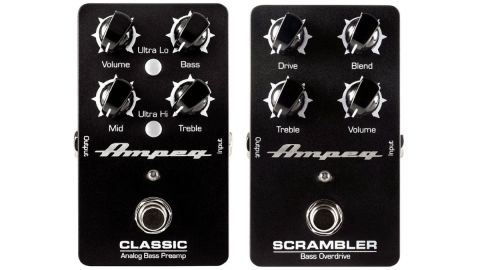 While not an exact replica of the classic Ampeg preamp, the Classic Analog Bass Preamp gets amazingly close for the price, while the new Scrambler has a unique and harmonically rich sound.

Ampeg is among the most venerable bass amp manufacturers in history, in part because of its consistent dedication to products for our instrument.

Even the company’s name comes from its first product, the “Amplified Peg,” a Michael Hull-designed pickup for upright bass released in 1946. And while Ampeg would evolve to produce a range of amps and effects for guitar, too, its bass offerings have always been the company’s bread and butter, with amps like the B-15 and SVT enjoying the same iconic status as the Fender Precision or Höfner “Beatle” bass.

Ampeg’s latest pedals seek to bring a few of its distinctive circuits to the mid-priced stompbox market: the cult-favorite Scrambler overdrive and the hallowed Ampeg Bass Preamp.

Both designs appeared recently in conjoined form via the SCR-DI, but Ampeg cleverly separated them into cheaper, smaller, less elaborate pedals for players who may not need the SCR-DI’s more robust feature set.

With the glut of bass gear on offer these days, it’s easy for young’ uns like myself not to realize that back in our instrument’s nascent days, there were only two main amp brands with legit cred: Fender and Ampeg.

While the companies’ amp concepts varied in many areas, perhaps most relevant were their substantially different preamps, particularly the “tone stacks,” the EQ-like sections of a preamp’s signal chain.

Whereas Fender’s tone stack was a highly interactive circuit (making achieving “flat” sound nearly impossible), Ampeg favored the more hi-fi design from English engineer Peter Baxandall. The Baxandall circuit in its basic form was a pair of shelving low-and high-frequency filters that could both boost and cut, thus more easily allowing a player to achieve a nominally flat frequency response.

The Ampeg circuit in the Classic Analog Bass Preamp incorporates this design, adding a midrange filter for further control. It also adds the ULTRA LO and ULTRA HI buttons originally found on the all-tube SVT head. Unlike the original SVT (and its many re-releases and preamp-only versions), the stompbox uses solid-state electronics.

The Classic preamp is well-constructed for the price. The metal housing feels tough, and its control layout is simple and intuitive. The interior revealed one main circuitboard, densely packed with surface-mount components. The Ampeg’s plastic pot shafts, jacks, and filter pushbuttons may be less durable than their metal counterparts, but unless a player gets abusive, they ought to stand up to the day-to-day rigors of use—and, moreover, they’re typical in this price range. The conventional footswitch felt durable and clicked confidently, although there was an audible little pop when engaged.

I’m well-acquainted with the Ampeg preamp design: I’ve built a B-15 clone preamp, dissected an SB-12 for an issue of BP, and owned multiple SVTs, and I have an SVP-CL preamp in my studio rack.

The Classic Analog Bass Preamp pedal does a very good job of capturing the circuit’s essence in a small and inexpensive format. The EQ circuits seem appropriately voiced, with the same gentle but effective curves commonly associated with the Ampeg pre. Similarly, ULTRA LO sucks out the mids like one would expect—the circuit has always been more about diminishing midrange (to create a sense of improved low-frequency response) than boosting lows. With the pedal merely in the circuit without EQ, there’s a diminution in lows and highs overall—it’s slight, but apparent, a perception I confirmed by looking at its frequency spectrum using an analyzer.

This, too, is not unlike the original Ampeg design. To my ear, the one notable difference from its tube-fueled predecessors is that the Classic isn’t as harmonically colorful when pushed hard, and thus it lacks some of the thickness and texture associated with the original. Those seeking a bit of that Ampeg flavor—thick lows with a healthy bit of upper-mid bite—will find a quick solution in the pedal version.

The Scrambler name and circuit dates back to the late ’60s, and while the original pedal never quite caught on, it developed a cult following in later decades; it was always known as a bit of an outlier, overdrive-wise. The new Scrambler seeks to bring some of the original’s singular sound to a more modern format.

On a basic level, analog distortion pedals are all the same. Through any of several circuits, an input signal is manipulated such that the output has added harmonic content. The methodologies for achieving distortion have different harmonic impacts, but the resulting distorted signal always has a substantially changed timbre.

The original Scrambler was known as a distortion that added a strong amount of the first harmonic, which (without diving into the physics of sound) is one octave above the fundamental. Instead of the new Scrambler’s DRIVE knob, the original Scrambler called the parameter “texture.” This reflects how Ampeg perceived distortion not just as a means of achieving a stereotypically more aggressive sound, but as a means of manipulating an instrument’s timbre.

The new Scrambler doesn’t much resemble the original in design. In addition to the DRIVE control, there’s also a TREBLE knob to further emphasize the impact the distortion circuit has on high-frequency response. One welcome retention from the original is the BLEND control, which allows a player to decide on the ratio of clean to distorted tone.

I liked the new Scrambler a lot, although I didn’t have an original for comparison. It does indeed offer a somewhat original-sounding distortion, with more of the odd-order-harmonic intensity and aggressiveness one might more commonly associate with a fuzz pedal, rather than a tube-emulating overdrive.

The BLEND control was a great partner in creating a sound that helped me cut through a dense band. And it was nice knowing that if I needed more presence, the TREBLE knob was there. For the price, the unique-sounding Scrambler would be a superb addition to anyone who likes having a variety of sound-mangling distortion pedals on hand.