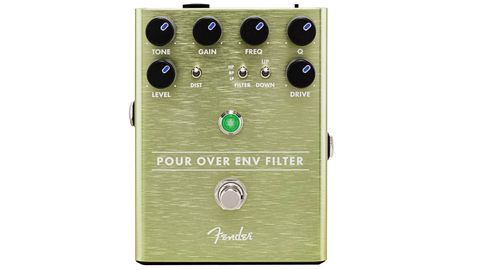 There’s plenty to explore with the Pour Over Envelope Filter if you’re up for taking your pedalboard in a more leftfield direction, with onboard gain adding grit and a synth-esque effect to the filter sweeps. Very cool.

Envelope filters, eh? One could make the case that Mike Beigel’s Musitronics got it right with the Mu-Tron III in the 70s and that everyone since has been using that template and just adding their own bells and whistles.

Fender’s first foray into the genre has a similar set of controls to a Mu-Tron on the right with the familiar three-way filter choice (high-pass, low-pass and bandpass) and an Up/Down switch.

Here, however, there’s the addition of a distortion section on the left-hand side via a toggle switch.

Without the distortion, there’s plenty of variations of auto-wah, quacky shifted tonality and filter sweeps available with careful juxtapositioning of the controls, but bringing in the distortion adds an instant edge and throatiness that can make those filter sweeps more synth-like and get you closer to talkbox-like sounds.

As a bonus, you can use the distortion on its own - possibly adding some tonal shading rather than filter movement.

As with the other pedals in Fender's lineup, the knobs have LED lights that you can turn on and off via a switch on the side of the pedal.

The Pour Over is housed in the now-familiar anodized aluminium Fender enclosure, and it really is a great design. With offset I/O jacks and a battery that is a cinch to change via a pull-down flap.