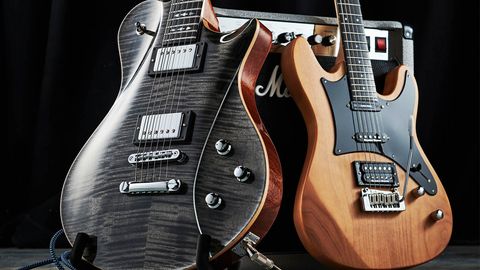 If you’re looking for a strong contender for a list of Les Paul Standard alternatives, you’re advised to check out the Panthera II Supreme. As for the Diablo Pro? There are more charismatic-looking rivals, but it will become increasingly attractive the sweeter the deal you can get.

You gotta have some front to call your new electric guitar ‘Supreme’. It’s like a boxer nicknamed ‘The Killer’. The minute he’s stretchered from the ring unconscious, the game is well and truly up. In this instance, Framus has given its Panthera II Supreme contender every fighting chance to live up to its name with some high-spec gestures.

Taking its cue from the mighty Gibson Les Paul Standard, the Panthera features a mahogany body with a thick and fabulous AAA maple cap. The top benefits from some beautiful German carving, which lowers the level of the volume and tone controls on the treble side, and on the bass side where the three-way pickup selector toggle switch resides. The contouring is emphasised by some silver pin-striping. We’re not sure this silver lining adds anything to the aesthetic impact, but some of you will likely, er, like it.

Moving on, this cat’s got the cream of humbucking goodness thanks to a bridge-dwelling Seymour Duncan SH-11 and the neck-located APH-1N Alnico II Pro. The wiring loom presents itself as a pair of volume controls, a master tone with push/ pull functionality to split the pickups’ coils, and a three-way pickup selector toggle switch.

Hardware responsibilities are entrusted to Tone Pros for the chrome tune-o-matic bridge and stop tailpiece. These metal appointments feature small Allen head bolts that secure them in place when you’re changing strings. The tuners are Graph Tech Ratio locking jobs. They look good and keep the tuning solid, which is about all we can ask of them.

The other substantial part of the Panthera II Supreme involves a set 628mm (24.75- inch) scale, ‘fat’ profile mahogany neck and a sweet-looking ‘tigerstripe’ ebony fingerboard – look closely and you’ll see the little streaks that give this its name. The 305mm (12-inch) radius ’board plays host to 22 extra high jumbo frets. Scour our pics and you’ll notice that you can’t see the ends of the fret tang, the bit that’s hammered into the ’board. This is one result of Framus’s IFT or Invisible Fretwork Technology.

“The IFT system allows for fret installation with perfect precision and previously unmatched constituent quality,” says Framus. “Compared to traditional fretting techniques, the fret slots are not cut across the entire fingerboard. Instead, two millimetres of wood remain on each side. This results in a U profile, which increases neck stability against twisting and improves the transfer of vibrations into the instrument.”

This notched tang fret installation is far from unique, although we’ve not heard quite such bold claims in regard to stability and vibrational transfer before. Either way, it’s a very tidy job. Shifting our attention to the D-Series Diablo Pro you’ll uncover a more Fender-inspired spec sheet. The five-piece 648mm (25.5-inch) scale maple neck is also topped with a ‘tigerstripe’ ebony fingerboard, 22 jumbo frets and a set of die-cast tuners.

This little lot is bolted to a basswood body using two visible screws (there are others hidden away) and a recessed crescent shape plate. The neck/body interface, the Ergonomic Neck Joint, is designed to offer the greatest possible stability and Enhanced Vibration Behaviour without impeding the player’s efforts at the higher frets.

The Panthera II Supreme has a tidy set-neck.

The Diablo Pro is a bolt-on. Only two screws are visible on the rear of the guitar, but there’s additional anchoring inside the neck join. Despite this, we did experience some creaking when we played the guitar.

Running our finger down the spec sheet we hasten to mention the pickups. Here we get a TB-4 JB Trembucker at the bridge, the SSL-1 RWRP Vintage Staggered single coil in the middle, and a SCR-1n Cool Rail humbucker at the neck. This powerful gang is routed through a master volume, a master tone with a push/pull coil-split function, and a five-way pickup selector lever switch.

Before we move on, let’s take it to the bridge. Here you get a chunky Framus-branded Wilkinson two-pivot point vibrato with a push-in arm. It’s just as well the Diablo Pro is well hung in the hardware and tonal departments. With the greatest of respect, it’s not a looker. That natural finish and thick single-ply black scratchplate combo are hard to reconcile with its £773 price tag.

Both models come with RockBag padded gigbags. As you might expect, the Panthera II Supreme enjoys much thicker padding at its price point. If its bag was a porterhouse steak, the Diablo Pro’s thinner ‘Student Plus’ carrier would be Wiener schnitzel. Here endeth the German puns…

It might look like an HSS format guitar, but the Diablo Pro features a TB-4 JB Trembucker at the bridge, a SSL-1 RW/ RP Vintage Staggered single coil in the middle, and a SCR-1n Cool Rail humbucker at the neck. It’s actually an HSH guitar with coil‑split options.

There’s some beautiful German carving to be found on the Panthera, which lowers the level of the volume and tone controls, and of the three-way pickup selector toggle switch pictured here.

In keeping with its high-spec appointments, the Panthera II Supreme features a set of locking Graph Tech ratio tuners. Script on the rear of the headstock also confirms that the guitar was built in Germany. Not all German guitar brands do that…

The Diablo, meanwhile, is fitted with a set of Framus die-cast tuners.

The Panthera II Supreme’s ‘fat’ neck profile deserves the quotation marks. In reality, it’s slimmer than its beefy name suggests. Think of a ’59 Les Paul profile with a tad less meat. Just don’t expect the obesity of an earlier 50s Gibson neck. The Diablo Pro’s neck is on the slim side, more like a mid-60s vintage Fender.

In terms of playability, both guitars do a sterling job with the Panthera II Supreme excelling thanks to its Plek’d ’board. Maybe there’s something to the Invisible Fretwork Technology, too. It’s hard to tell. All we know is the action is great, there’s no buzzing or choking, and dead spots are conspicuous by their absence.

Plugging in the Panthera, we’re immediately struck by the power of the bridge Seymour Duncan SH-11 Custom Custom. Running at 14.1k, it’s packing twice the DCR of a classic PAF yet it retains some vintage warmth thanks to its Alnico II magnets. Tonally, this pickup’s bark is in its treble and midrange.

The bass end is less defined and, again, more vintage flavoured. When you figure in the neck APH-1N Alnico II Pro humbucker that completes the Panthera’s tonal tag team, this guitar feels more like a classic rock contender.

You can, of course, split these pickups for single-coil tones. Think of this as a clarity switch when you’re running the bridge pickup on high gain. When applied to the neck pickup it reveals more of the woodiness you want for blues noodling on clean and light overdrive settings.

The message here? Anything you’d want to subject a Les Paul to, the Panthera II Supreme would be more than happy to accommodate your needs and then some.

The Diablo Pro has plenty to say via its bridge-mounted TB-4 JB Trembucker. This is the vibrato-spaced version of the iconic ‘Jazz Blues’ ’bucker. There’s bags of the midrange that JB junkies will be familiar with and we always enjoy this pickup’s impressive note separation, no matter how much dirt we pile on top of it.

The middle-position single coil eliminates hum when you run it in conjunction with the bridge or neck ’bucker. In split mode you get some dead on Jimi and Stevie Ray in-between sounds. Yep, despite the Diablo Pro’s utilitarian looks, this guitar is actually a pretty impressive tonal tool. Tuning stability is damn good, too, though we did pull a few creaking sounds from the neck/body join when we dumped the strings with the whammy bar. Maybe it’s just settling in…

You can see where all the money’s gone into the making of the Panthera II Supreme: the high-grade top, Seymour’s pickups and the whole ‘Team Built in Germany’ thing. This guitar exudes class. It’s right in the kilogram sweet spot in weight for a Les Paul-inspired guitar, and the neck shape will make far more friends than enemies. We could live without the silver go-faster stripes, but that’s a small niggle.

The Diablo Pro is a bit tougher to love. This Chinese-sourced model is a bit like those souped-up hatchbacks you see loitering in supermarket car parks, late on a Friday night. Yes, they’ve got nice wheels and a big stereo, but deep down these kids know they’re posing in a basic Vauxhall Corsa (or Opel Corsa, if you’re reading this in Germany).

That’s the problem we have with the Diablo Pro. It doesn’t look or feel like a £773 guitar. At this price point you’re into Yamaha Revstar, Fender Vintera, even entry-level Gibson territory.

Bottom line? If you’re looking for a strong contender for a list of Les Paul Standard alternatives, you’re advised to check out the Panthera II Supreme. As for the Diablo Pro? There are more charismatic-looking rivals, but it will become increasingly attractive the sweeter the deal you can get.