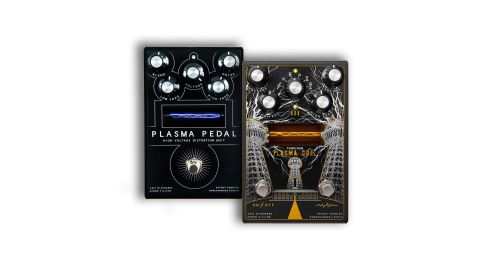 These pedals radically update the beloved fuzz effect with precise definition and bold, unusual textures that satisfy the needs of modern players who are looking for new inspiration.

The fuzz pedal was one of the very first effect pedals created for the electric guitar, with a history reaching back more than 55 years. Over the years, pedal designers have used various means to generate the distinctive heavily saturated and compressed square wave clipping known as fuzz, including germanium and silicon transistors, tubes, LEDs and even digital modeling.

With their new Plasma pedals, Gamechanger Audio has innovated the most radical, new extremes - both in circuitry and sound - to come along since the first fuzz box was introduced.

The technology combines a step-up flyback transformer, a Xenon gas tube and an antenna to convert a guitar’s signal to extremely high voltage impulses (up to 3,500 volts) and transform electrical energy into an audio signal. The end result is wickedly distorted sounds that are certainly fuzz, but not as we know it, Jim.

The Plasma Pedal is the more straightforward iteration of the two, providing an outrageous variety of brutal and nasty fuzz tones and textures. Its features consist of a Blend knob that adjusts the mix between the guitar’s dry signal and the processed sound, Voltage, which adjusts the amount of voltage sent to the Xenon gas tube, a master volume control and Low and High Frequency knobs that adjust EQ over a very wide range.

The Plasma Coil includes the same Voltage, Volume, Low Freq and High Freq controls as the Plasma Pedal, but instead of a Blend knob it has a six-position rotary switch that provides a variety of subharmonic and upper harmonic settings and a voltage booster fuzz effect.

The effect selected by this switch is accessed via a second footswitch (in addition to the effect on/off footswitch) that can be set to latch or momentary functions via a rear panel switch that replaces the Plasma Pedal’s EQ switch.

The Xenon tube on both models is exposed so users can see the lightning-like electrical charges running through the tube, with the Plasma Pedal delivering a brilliant blue glow while the Plasma Coil lights up in eerie yellow rays. Both pedals have standard mono ¼-inch input and output jacks and are powered with a standard 9-volt center negative adapter or power supply.

The technology in Gamechanger Audio’s Plasma pedals delivers a vast new universe of fuzz tones for guitarists to explore that cover a wider range of frequencies and textures than ever imagined before. The EQ controls on both pedals dial in tones that range from massive, elephantine bass to sizzling, mosquito-like buzz.

Even though the signals can be distorted quite heavily, guitarists can still play chords and hear each note distinctly, although some of the more extreme octave down settings in the Plasma Coil may not deliver quite the same performance.

One particularly distinctive element of the technology is its inherent instant noise-gate effect that abruptly cuts the sound to dead quiet as soon as you stop playing. The attack is unusually tight for a fuzz pedal and notes can sustain for a long time without fading in volume before cutting off abruptly.

This gating effect enables guitarists to play extremely fast lines and riffs with remarkably precise definition. Most fuzz pedals will smear notes together in these circumstances and generate godawful white noise in between notes at extreme settings, but even at the most radical settings the Plasma’s effects retain uncanny detail.

As a result, the Plasma Pedal and Plasma Coil are some of the few fuzz pedals that even the most discriminating metal players will find up to their performance standards.

The Blend control on the Plasma Pedal makes it a better choice for players who may not want to go all in with their fuzz effects as it can be layered more subtly in the background if desired.

The Plasma Coil is better for more adventurous players, delivering a dazzling variety of octave down and/or octave up textures with stunning harmonic brilliance. With the second footswitch set to momentary, players can toggle between textures rhythmically or accent individual notes or lines.