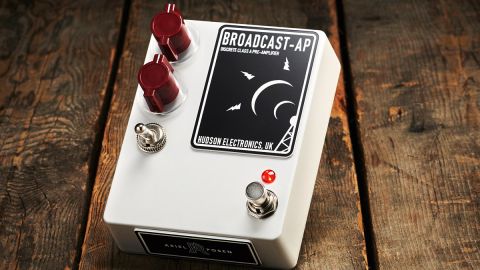 While still recognizably a Broadcast and undeniably potent in front of an amp, the subtle tonal differences and changed ergonomics offer a viable alternative to the standard model - the choice is yours!

Designed to deliver the type of saturation available from classic broadcast and recording consoles from the 1960s, Hudson’s original Broadcast stands out among drive pedals.

Its Class-A discrete transformer-coupled circuit makes it capable of many roles from clean boost on to heavier overdrive sounds and fuzz. That tonal mojo comes in part from circuitry featuring a Triad Magnetics steel-core transformer and a germanium transistor, but this new version - designed with Canadian guitarist Ariel Posen - has swapped the germanium for silicon and uses an OEP transformer that saturates and distorts less on low frequencies, the idea being to keeping more weight in the low-end.

There’s a simpler interface, too: a high-pass/low-cut filter switch replaces the original’s variable low-cut knob and the high/low gain switch has gone altogether - not needed due to a wider-ranging Gain Trim control that has 12dB more gain than the low-gain side of standard units for medium-gain drive tones.

If you need more, there’s plenty on tap via an internal trimmer for increasing the overall gain of the pedal, getting gloriously fuzzy towards its max. The pedal is dynamically responsive to picking strength and cleaning up with guitar volume, so it scores on string clarity, with individual notes in an overdriven chord coming through crisply.

Tonally, it offers a nice thickening of the midrange as you turn up the gain, while the top-end has plenty of sparkly chime.

The fat warmth suits the Ariel Posen slide style, but if you don’t need so much bottom-end, the low-cut switch instantly rolls it off for a leaner sound that will sit better with some rigs.

While the pedal sounds great powered at nine volts, our preference is at 18 volts for extra headroom and a more open sound.

Ariel Posen uses his as an always-on pedal to put some hair on a clean amp, but the Broadcast works just as well as a switchable asset however your amp is set, providing tonal enhancement, boost and a versatile drive range.

Going back to the original Broadcast circuitry, this very practical dual-footswitch version puts the Gain mode (Low or High) on a second footswitch, while each mode has its own Level control. The amount of gain for each mode can be fine-tuned by internal trimmers.

Another pedal that has its genesis in vintage consoles, The Crayon is actually a cut-down version of the JHS Colour Box, which is based on vintage Neve circuitry with a preamp you can drive for thickening and eventually fuzzy harmonic distortion.

If you’re going to go old-school, how about something with a valve? This US boutique pedal features a high-voltage (220-volt) driven 12AX7A valve at its heart for natural compression and harmonically rich tone.