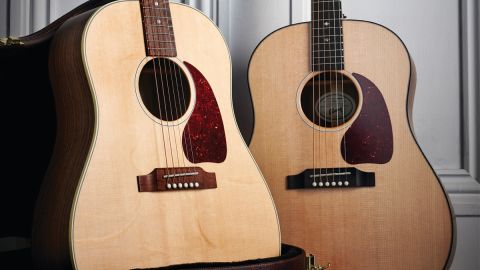 We were right to get excited about these instruments. They not only represent Gibson’s commitment to putting right the perceived wrongs of the past, but they also have read the market and provided guitars that fill a gap in the affordable mid-price range, to become workhorses for the next generation of acoustic players. Solid woods (although the Richlite present on the Standard’s fingerboard and bridge still bothers this writer a little), nitro finishes and the stamp of Gibson’s Montana facility’s high quality can only be a good thing. The naysayers will doubtless snipe, but we genuinely urge you to seek these guitars out and try them yourself.

Everyone out there in guitar land knows about Gibson’s efforts to rediscover its mojo under a new CEO. We’ve looked at its revised electric-guitar range and, so far, have found pretty solid evidence that things are on the up again after a painful dry spell.

Of course, many are still sceptical – you only have to tiptoe into any online guitar forum to witness the furious debates and virtual fist-fights that still rage on. For many, it’s a wound that will take time to heal, but, from what we’ve seen already, confidence in the new approach is largely justified – though only time will tell if the current management is able to pull off a renaissance that just 12 months or so ago not everybody thought possible.

This new Generation series acoustic range – currently only two models strong – is a bold venture for Gibson. The G-45 Studio, in particular, is something the company is branding as “a new point of entry into a Gibson acoustic”. Just $999 for an all-solid-wood electro-acoustic with ‘Gibson’ on the headstock in a rather poshlooking hard case? What on earth can be happening?

Well, that’s just what we’re here to find out…

First impressions are always important when we review an instrument, it’s the approximate equivalent of ‘kerb-appeal’ when house-hunting. Opening this pair’s very impressive-looking cases reveals a handsome duo with a dialled-back level of ornateness, giving the impression that build quality is paramount. After all, the finest wines come with the plainest labels.

The G series is built at Gibson’s renowned Montana plant and we’ve seen some stunning instruments coming from that direction and so, needless to say, we’re a little bit excited.

Running our eyes down the spec lists for each guitar and we can see that the actual build materials are very similar on both models, with a few twists, tweaks and refinements in the Standard model to justify the price hike of some $300. But it’s the Studio model that captures our attention – we’re still having problems digesting the relatively low price point for an all-solid-wood acoustic.

Both instruments have Sitka spruce tops and walnut backs and sides. Sitka needs no introduction to an acoustic player, but the sonic qualities of walnut might be a little unfamiliar to many. Nicely figured, it’s a less dense tonewood than either rosewood or mahogany and the sound it produces falls somewhere in between. It has the robust woodiness of mahogany but also the depth. of rosewood. Combined with the spruce top, this could be a good pairing.

The timber used for the neck is more unfamiliar – utile. Sometimes referred to as ‘sipo’, the grain appears very similar to mahogany and other mahogany alternatives such as sapele. Its presence on a guitar is unusual, but with the recent lock-down on rosewoods and other endangered woods, we suppose what we’re seeing here is the result of painstaking research into alternatives. In any case, both necks are one-piece and the lamination on the front of the headstocks is walnut.

The fingerboard material differs between the Studio and Standard in that the former is walnut – again, not so common, but it looks great and has a reputation for strength and durability and so should be fine – but the Standard is Richlite. This is a composite of paper and resin and certainly not a ‘solid wood’ or even wood at all. However, it looks like ebony and is resilient and hard-wearingand so why shouldn’t it make a perfect fretboard material?

Half of us want to nod sagely here, while the other half battles with the ‘not a solid wood’ argument. Richlite is not only sustainable, its ‘green’ credentials are fairly high as the paper part of the composite is generally from recycled sources. Its use is not unknown – Martin’s lower-end models tend to use it, as well as MDF for their necks and Godin champions it, too. This might just be a sign of the future and so open-mindedness must prevail, however uncomfortable this shock of the new might make some of us feel.

Another characteristic shared by both models is the pickup system. Fishman’s Sonitone is Gibson’s choice here, with the controls hidden away inside the soundhole. Returning to an earlier theme, just what is it that accounts for the difference in price point between the two models? All we can say is that the Studio model looks a bit less well dressed. Think of a Studio Les Paul versus a Standard, for instance. But the differences aren’t too pronounced.

Standing them side by side, you can see the Standard has slightly more ornate fingerboard markers, but both bodies are bound nicely, albeit with different materials. The Studio has a matt finish whereas the Standard has a gloss top with matt everywhere else – and both are nitrocellulose.

Sound-wise, the Studio is bright and crisp with all the ranges – treble, middle and bass – present with no unwanted peaks or troughs in the frequency spectrum. This formula is repeated on the Standard model, with perhaps a little more presence in the mix: it has a tad more sparkle. Both have almost identical necks – fattish but not unwieldy – and the actual playing experience is generally excellent.

We spent a considerable time with both instruments and we’ve decided that it would be a tough choice to make if we were forced to settle on one or the other.

The Fishman Sonitone system proves its worth as an excellent companion when both guitars are plugged in, with a flexible control over the sound, its presence here adding another string to the G series’ already formidable bow.