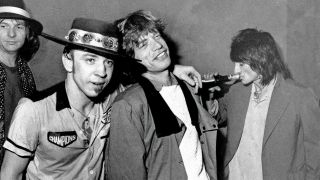 1. Vaughan appears in an extended 1988 TV commercial for an oil company

He even can be seen riding in a tank at one point! Mind you, this three-minute-long video looks and plays like a fairly cheesy late-Eighties music video for a song called Travelin’ On, but - apparently - it’s a commercial for Europa fuel. The video features Midge Marsden, Murray Grindlay, Janna Lapidus (Vaughan’s fiance at the time) and Brigitte Berger, all of whom drive around New Zealand, eventually stopping off near a DC3 airplane parked in a small town. They walk into a bar and join Vaughan on stage. Track down the video on YouTube!

2. For a Halloween gig at the Austin Rehearsal Complex in Austin in 1980, Vaughan dressed up as Jimi Hendrix - wig and all

He got the wig from Randy Hansen and did the entire gig dressed that way.

3. SRV was a huge fan of Derek and the Dominos’ Layla and Other Assorted Love Songs album and learned to play every song note for note - including every Eric Clapton guitar solo

Not a bad idea, actually.

4. Vaughan plays drums on the original studio version of Empty Arms on 1985’s Soul to Soul

He plays guitar on it too, of course. We say "original" because there’s another studio version of Empty Arms on 1991’s The Sky is Crying (featuring Chris Layton on drums).

5. Vaughan was a big fan of The Urantia Book, a spiritual and philosophical tome that originated in Chicago between 1924 and 1955

Its authorship remains a matter of speculation. In his early days, Vaughan would carry the book with him everywhere.

What’s even weirder is that the album reached Number 17 on Billboard’s Hot 100. Vaughan can be heard on Love Roulette.

7. How did SRV get his Number One Strat?

As told by Chris Layton: “He said he walked into Ray Hennig’s Heart of Texas Music with a black Strat and stood, looking at the guitars on the wall. He said, ‘Will you trade me this guitar for… [slowly moves his finger through the air in a straight line, and then stops, transfixed, like a divining rod], ‘…that guitar right there!’ [Laughs] He picked up a vibe from the guitar, from all the way across the room!”

8. For a brief period, before he decided on being called Stevie Ray Vaughan, he wanted to be known as “Sting Ray”

We think he was wise to reconsider.

On April 22, the band flew to NYC for a one-off gig at the Danceteria nightclub to play for the Rolling Stones. “Mick [Jagger] had seen the tape and been impressed, and Chesley [Millikin] said, ‘You’ve really got to see these guys live,’” Layton said. “The next thing we knew, we were playing a private party for the Stones in New York. It was a gas.” Guests included Jagger, Ronnie Wood, Johnny Winter and Andy Warhol. A post-show photo of a sweaty SRV smoking a cigarette on a couch next to an elated-looking Jagger made it into Rolling Stone magazine’s Random Notes section, and rumors swirled that the band would be signed to the Stones’ label.

Vaughan’s studio version of the Beatles’ Taxman appears on Stevie Ray Vaughan and Double Trouble: Greatest Hits, even though it was a previously unreleased track and a total non-hit. It’s interesting to note that when Joe Bonamassa performed Taxman at Liverpool’s Cavern Club in 2016, he played Stevie’s version!