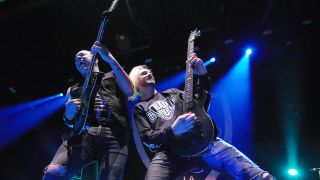 Often referred to as the breakout band of 2018, Bad Wolves’ ascent to the top of the charts, and their first taste of significant success, came via their cover of The Cranberries’ Zombie, from their debut album, Disobey.

The story behind the song has been told an infinite number of times: Dolores O’Riordan, vocalist for The Cranberries, was scheduled to sing on the track, but tragically passed away before the recording session could take place. In turn, Bad Wolves released their version as a tribute to her, with all proceeds going to her children.

Zombie reached gold and platinum status in numerous countries, resulting in impressive chart positions for Disobey, additional chart singles, and a touring schedule that took the band around the world.

When it was time to record a follow-up album, vocalist Tommy Vext, drummer John Boecklin, guitarists Chris Cain and Doc Coyle, and bassist Kyle Konkiel drew on their collective years of experience to hone their sound.

The hard work paid off. With Boecklin and Vext again handling the bulk of songwriting and production duties, N.A.T.I.O.N was released in October to considerable fanfare.

The disc volleyed onto international playlists and album charts as the band took to the road for a U.S. run with Five Finger Death Punch and Three Days Grace, working in a few headline dates of their own. They’ll begin the new year by trekking across Europe with FFDP and Megadeth for two months.

Cain and Coyle bring different styles and backgrounds to Bad Wolves, but pride themselves on blending their individual approaches into a tight harmonizing unit built on their strengths as both lead and rhythm guitar players.

Cain, known for his work in Bury Your Dead, grew up in Des Moines, Iowa, where he began playing guitar, including almost two years of classical studies - a far cry from the hardcore bands he joined and toured with.

He also worked as a guitar tech before and after moving to California in 2013. That’s where he met Boecklin, and together they planted the seeds that became Bad Wolves.

He founded the band Vagus Nerve, whom he says “still exists but is not active at the moment,” and has contributed to other artists’ projects onstage and in the studio. He also hosts his own podcast, The Ex-Man.

Chris Cain and Doc Coyle were in rehearsals for Bad Wolves’ U.S. dates when they spoke to Guitar World.

How are your playing styles similar and different, and how do those elements make for a better guitar team?

Cain: "Doc smokes me on leads. He does things that I can’t even comprehend. At the same time, there are rhythm patterns that I play and it’s like a reverse effect: he wants to know how I do them. Things like that make us balance one another out.

"I did more solos on this record than on the last one, and Doc has helped me with my technique and phrasing, while I’ve coached him and taught him ways to go about polyrhythms to make it sound tighter, so that we lock in better."

Coyle: "In many ways, Chris is the unheralded star of the band. He is technically incredible as far as rhythm. He’s so tight with that stuff, and I feel like I’m playing catch-up, because at the heart of what I do, I’m a thrash-metal guitar player and more of an old-school guy.

"The big breakthrough is that I did the solos on the last record, and Chris is now a co-lead player doing really ambitious stuff. He’s a very clean player, and he writes solos that have a flow, that have melodies and hooks."

Most people pick up a guitar with the goal of playing lead. Chris, could you talk a bit more about the importance of being a solid rhythm player?

"I’ve always been involved with hard rock and metal bands, but when I was a guitar tech, I worked for a lot of pop artists, and I’ve never seen such discipline in rehearsals. I listened to music directors talking about the importance of rhythm sections.

"None of that had ever stood out much to me before because I had that mentality about lead guitar: play fast and hit all the notes. It was an eye-opener because I could hear the difference a tight rhythm section made in the entire song.

"With our new songs, some of them have simple power chords, but they’re on the upbeat, and if I’m not right there with John, or with Doc when there’s an octave lead, it’s going to sound awful. It’s got to be in time and it’s got to be locked in. Otherwise, it throws the whole thing off."

Doc, how does partnering with a solid rhythm player like Chris push you as a lead player?

Coyle: "I don’t think of it that way. For the type of playing we do in Bad Wolves, it’s more important to be a powerful rhythm duo than a lead duo. Even though we have quite a bit of lead guitar in the band, for me, it’s never about playing the most notes. It’s always about serving the song.

"I’ve been lucky to play with a lot of amazing guitar players, and there’s nothing better than when you have two rhythm players locked in who understand fundamentally what they’re trying to get across.

"A lot of people think tone is about the amp or the sound guy, but it’s in the hands and the technique. Chris and I play differently, so we’re always working on locking in, making it feel as one, and making it sound precise. When you have that, it takes a band to the next level.

Tell us about your guitars.

Cain: "I’ve loved PRS guitars since I was a kid, but I could never afford one. When John and I started writing together and got this band going, he met the PRS guys at NAMM, and they sent me an e-mail asking if I was interested in playing their guitars. [Cain uses the SVN seven-string, a 277 Baritone, Zach Myers Semi-Hollow single cutaway, and SE Custom 24.]

"I love the PRS necks, their size, the weight of the guitars, and since we’ve kind of gotten away from super-low tunings, I do a lot more with six strings, and PRS is perfect for that, perfect for the big, heavy power chords."

For being in a functioning, touring, professional band, you need instruments that get the job done, and ultimately, ESP’s are the tools for that. [Coyle plays two ESP E-II FR-7 Horizon seven-strings, an M-II six-string, and E-II ST-1 six-string, all with Floyd Rose tremolos and DiMarzio pickups.]

"When I started playing with Bad Wolves, I needed some really specific things, and they customized the guitars for me. I was looking for note stability because we tune very low. That’s why I went with the Floyd.

"They also installed the DiMarzio pickups. I love that attention to detail, and the fact that these guitars sound good and are reliable. They won’t break down when we’re on the road."

When did you make the switch to Kempers?

Cain: "I moved over when we got signed. We were going to tour, and we were getting ready to start rehearsals. We had done some shows in L.A. using real amps, but we had fly dates coming up, and the Kemper just made things easier.

"But honestly, I’m so ready to go back to a real amp. There’s something you get with real tubes that you can’t emulate. I used a Mesa cabinet for the longest time, but on this tour, with our new production, we’re just going direct."

Coyle: "I started using the Kemper when we started touring. The band had an established sound, and I wanted to represent what was on the record. But I’ve been using my EVH stuff for the power section, and what you see on my gear list is a new rig that I’m in the process of building.

"More than likely, that will eventually be my main rig, with the EVH gear, the Fractal, and the Torpedo. [Coyle has used EVH since 2010.] But, with traveling overseas, doing fly dates, and getting ready to do the shows without a cab, Kempers are valuable from a productivity and efficiency standpoint.

"For a band like us, where every section of the song has a different tone - super heavy, crunch, lead with chorus, clean - the Kemper really makes it work. But, again, I’m an old-school guy, and I love the way a tube amp reacts."

Tommy is very open, in his lyrics and interviews, about having battled depression and coming close to suicide. These issues are at an all-time high amongst young people, so a serious closing question for fans who may know someone in need: How do you best provide a support system for a friend, family member, or bandmate who is recovering or struggling?

Cain: "I relate to this a lot. I don’t talk about it much, but when I first moved to LA, it was hard, and I went through bad depression, anxiety, and stress. I would say it’s good to talk about it and get it off your chest, because if you don’t, things build up and build up and then you explode, and you don’t want that to happen.

"It’s damaging to you and to the people around you. So I’m a strong believer in talking and getting your emotions out there. Tommy and I talk to each other about things that are bothering us, or just if we’re not feeling good that day.

"So I would say, if you know someone who’s not doing too well, talk to them. It sounds super-cliché and corny, but when I was going through it, someone asking, 'How are you doing today?' or just giving me a pat on the back and saying, 'Take care, man,' something that brief, could turn my whole day around at a moment when I felt like nobody wanted to talk to me and everything was crashing down.

"It’s hard to look at things in a positive way when things are super-negative, but you have to work through it, because negativity gets you nowhere. I’m still even working on it."

Coyle: "You have to be available and open to helping that person. It’s not easy, but it is as simple as that. I’ve dealt with depression and anxiety, and for me, what helps is spending time with friends and family, being productive, working out, creating things, and being constantly involved in something.

"In my darkest times, my friends and family were there for me. Don’t be afraid to lean on people, but also vice versa when someone needs you. It sounds like a cliché, but that really is what friends are for."