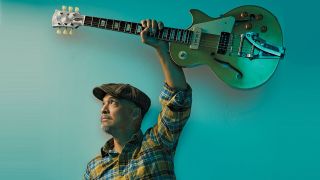 This longtime Pixies guitarist has also shaken things up with the Martinis and Frank Black (aka Black Francis) and has composed scores of soundtracks. At the moment, he’s particularly excited about the Pixies’ new album, Beneath the Eyrie. But what Guitar World readers really wanna know is…

You’ve always been a Les Paul guy. What initially led you to that guitar? - Alison Storegard

Charles [Pixies frontman Charles Thompson, aka Black Francis] beat me to the Tele! When we first got money he bought a Tele and I still had my guitar, which was an Ovation Viper that my mother had bought me. I was gonna replace it, and Charles had the Tele so I bought a Les Paul. It seemed like the perfect combo.

What was your main guitar and amp setup on the Pixies’ new album, Beneath the Eyrie? - Jay Woods

It was my ’57 Les Paul reissue - the black one, with a Bigsby - through a Marshall JCM 800, the one with two channels. And in front of that was a Sixties Fender Vibrolux. I used a Fulltone OCD pedal, and then Tom Dalgety, the producer, had a [Crowther] Hotcake. That’s a great pedal. I also had my DOD [FX17] wah, which I’ve been using for a while now. And for delay it’s the Maxon [AD-9]. That’s pretty much it.

Do you have a favorite song on the new album? - Michael Ferris

I like Daniel Boone. It’s a slow one. It’s ballad-ish, for lack of a better word. But it’s not a ballad. What do I like about it? I happen to like my guitar part the best on the album. It’s clean, it sets the mood, and it was pretty much done in one take, tracked with the drums. So I didn’t have to do any overdubs on the main part of it. Then we put some EBows on it for more atmosphere. But I overdubbed those. I couldn’t do that at the same time! [laughs]

What was the first Pixies song where you felt you had something special? - Jeanne Parsons

That would be Levitate Me [from 1987’s Come On Pilgrim]. It was that little riff at the end of it. I was trying for something along the lines of Don’t Fear the Reaper. [laughs] I don’t think the rest of the band knows. I’m afraid to tell ’em. Maybe you shouldn’t print this! And then there’s that tremolo thing I do on the E, it sounded like a helicopter to me. So it was like, “All right, now we’re starting to get somewhere. The visuals are starting to happen.”

I’ve always loved your solo on Vamos. I’ve read that to get some of those sounds you threw tennis balls at your guitar in the studio. Is that true? - Dan Troy

We were throwing stuff at it. But I wonder if we ever did that? You know, I’ve always wanted to do that. And I think we did do it, at least for the Surfer Rosa version. It was just about making fun of guitar solos. Just thinking that they’re wanky and there was too much acrobatics. I know I play the guitar but I find extended solos… unentertaining.

I like riffs. I like something memorable. And a lot of solos are. Hendrix’s solos were always memorable because there’s sonic stuff involved with them. And there’s a melodic element. So I’m not saying all guitar solos are mundane. But there should be a certain hook around it, there should be a certain theme around it. Plus, the era we were recording in was the heavy metal era. I wasn’t into it. I wasn’t into the culture. I didn’t have the clothes for it. [laughs]

Do you have a favorite riff or guitar part you’ve written for a Pixies song? -Thomas Brody

I would say Where Is My Mind? It came out so easy and people liked it, you know? It was a one-shot thing. Charles showed the chord progression to me at his apartment and I just came up with it instantly. I put the guitar down and I went, “Well, that’s done!”

So many bands point to the Pixies as an influence. Do you ever feel like any of them have completely ripped you off? - Jim Rothkopf

Rip-off wouldn’t be the word. I would say influenced. And I have no qualms with that. Because I’ve ripped off and been influenced by other people. Although I get more influenced by sonics than the technique of what people do on the guitar. Technique, I kind of leave it to them. I don’t like to copy. I don’t think that’s the job of any artist. But being influenced by it, you know, it has to come from somewhere.

Do you remember what the first song or album that really got you was? - Dan Morrison

I feel uncool saying this but, hey, I was just a damn kid! It was Rod Stewart’s Hot Legs. I bought the single, the little 45. It’s a great song. C’mon! It ain’t Silver Lake cool, but it’s great. The guitars on it are awesome. And the video pretty much sealed the deal. Like, “Whoa, look at those legs!” I think it was Tina Turner’s legs that were just shot, strutting around. It was ridiculous. And it was also the first music video I saw, before MTV. That’s probably one of the reasons why I liked it so much too.

How does the writing process work between you and Black Francis? - Paula Ainsworth

He’ll come up with a chord progression and that’s when I’ll take it and write a guitar part around it. That’s basically what I do. Sometimes we do it together, like, there’s that song Silver Bullet that we did [on Beneath the Eyrie], where we were up late and we got excited about the guitar parts on it. He had one part and then I joined in on what I guess you’d call the countermelody.

For my part, if I can reference a vibe like Steve Reich’s Music for 18 Musicians I’ll do it. But it’s my own kind of interpretation - it’s never right, but no one is even gonna know what it came from. [laughs] Then I was also trying to fit an Ennio Morricone vibe into it. And then we started jamming around it and it came together and became Silver Bullet.

You’ve done a lot of scoring for film and TV. How does that differ from writing rock music? - Mark Lopez

Well, with TV and film there aren’t necessarily any rules involved with anything. Even time signatures can just go out the window. The other side of it is you’re more or less working with the vision of someone else’s project. So it’s more of a collaborative effort with a bunch of people.

You get these descriptions of things that they want and you might not see eye-to-eye on it, but you have to interpret it. You’ll have to interpret, you know, what they mean by sadness. Because there’s a million ways you can do a sad scene. And then the person in charge goes, “Okay, that’s wrong.” And they give you a revision. So what is it? What is the sadness they’re looking for? But once you find it, then it becomes this overall theme and it becomes easier. But the first shot of it is hard. So I would say the effort is a lot more intense.

In recent years the Pixies have done many co-head-lining tours with Weezer. What do you like about those guys? - Seth Gilman

They’re great people. Absolutely wonderful. Plus I really respect them musically. And the crowds - the fans are alike enough, but still different. So we’re turning on Weezer fans and they’re turning on Pixies fans. It’s one of those great things.

Who is your biggest guitar influence? - Keith Stratford

I would just go with the obvious, which would be Jimi Hendrix. Him performing The Star-Spangled Banner and making it sound like jets? That pretty much sealed the deal for me.

Do you think there will ever be a Joey Santiago signature Les Paul? - Henry Abshire

[laughs] That’s up to them! But you know what? Someone knew someone at the company and they wanted me to do something for an SG one time. I love the SG - Angus Young is one of my favorites - but I don’t play an SG. I get lost on an SG. It’s something about the neck. It’s the weirdest thing. So I did something for that but, you know, it didn’t take. But I hope they’ll do one.

When it comes to your guitar sounds, do you think about effects during the writing process or do they come later? - M. Lucero

I would say that I don’t think about the effects first. But once we’re in a live situation and we’re working on it then I’ll have effects going, and the effects will often lead me to a part. A good example on the new album would probably be Long Rider. The beginning of it has the delay on it. And it was just going to be one note - A to the high A, and then going up and down it on the octave. And I thought, “That’s not going to sound interesting.” So I just put a delay on it to make it swirl.