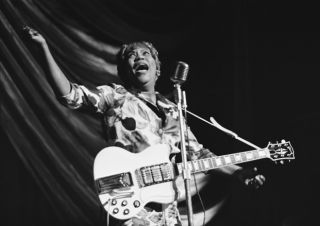 You could be forgiven if you've never heard the name Sister Rosetta Tharpe—or if you're surprised to hear that to many, she's considered “the Godmother of Rock and Roll."

Sister Rosetta might not be a household name; however, as a young woman during the 1940s through the Sixties, her recorded music and live performances played a highly significant role in the creation of rock, with Elvis Presley, Jerry Lee Lewis, Johnny Cash, Little Richard and Chuck Berry citing her as an inspiration.

As a musician, she was simply ahead of her time. Maybe even by several decades. Born in 1915 in Cotton Plant, Arkansas, Tharpe developed her distinctive style of singing and playing at age 6, when she was taken by her evangelist mother to Chicago to join Roberts Temple Church of God in Christ. At 23 she left the church and moved to New York. While performing there, she was signed by Decca Records.

For the following 30 years she performed extensively to packed venues across the U.S. and Europe and recorded more than a dozen albums. Sister Rosetta died in 1973, and very little video footage exists of her today. However, what is around is not to be missed. The clips below, which were shot in the 1960s, feature Rosetta armed with her '62 Gibson Les Paul Custom (renamed SG in 1963).

In the top video, she's playing “Up Above My Head,” a reimagined church standard with an added guitar solo, while a full gospel choir claps their hands in time to the music. In the second video, Rosetta plays “Didn't It Rain.” It was recorded under the eaves of an abandoned train station just outside Manchester, England, in 1964. Tharpe's remarkable musical legacy is undoubted by those who know of her impact on modern music.

Jonathan Graham is an ACM UK graduate based in London studying under the likes of Guthrie Govan and Pete Friesen. He is the creator of the Forgotten Guitar Facebook page, a classic-guitar media website, and is completing his debut album, Protagonist. Updates also can be found at Graham's YouTube channel.