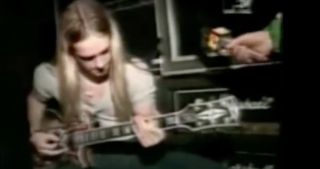 Wylde, who was 24 at the time, was touring in support of Ozzy Osborune’s sixth studio album, No More Tears. In the clip, which you can check out below, Zakk talks about some of his early influences, what it was like starting out with Ozzy and his opinions on having the ability to read music.

Midway through the clip, there's a closeup demo of his “chicken pick’n” technique, which shouldn't be missed. Around this time, Wylde was about to begin work on his own solo project, which would become Pride & Glory.

Ozzy, his then-current employer, had expressed his fatigue with the music industry and proclaimed that this particular run of shows—which was cleverly dubbed the "No More Tours" tour—would be his last.

Obviously, Osbourne would soon change his mind, and he and Wylde collaborated again on 1995’s Ozzmosis.

Jonathan Graham is an ACM UK graduate based in London studying under the likes of Guthrie Govan and Pete Friesen. He is the creator of ForgottenGuitar.com, a classic-guitar media website, and is completing his debut album, Protagonist, due for release in 2016. Updates also can be found at Graham's YouTube channel.