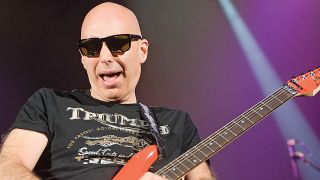 I witnessed Martin Barre playing guitar with Jethro Tull at the Westbury Music Fair on Long Island in July 1970. I think it was my second concert experience, and the venue was a “theater in the round” setup. They were in town on their Benefit tour. Martin’s sound and playing was just like it was on the Tull albums — exciting, earthy, stellar and unique. I was mystified by his perfect blend of electric blues, rock and some kind of British, renaissance-like folk style I couldn’t quite put my finger on. Being a kid from New York I found his entire approach kind of exotic. He was brilliant.

Jethro Tull were an unusual band to say the least, even in the context of the times, which were pretty crazy. Ian Anderson’s writing style was so musically adventurous but always solid. It was progressive stuff but with just the right amount of warmth and feel. Martin kept it real, gritty and grounded for me.

Stand Up is still my favorite from that era. Andy Johns produced and engineered that record and it has his unique sonic signature on it. Andy told me some great stories about the making of that record, which has only served to strengthen my connection to it. It’s funny how, as a fan, you can get stuck on one or two albums by your favorite band. Aqualung and Thick as a Brick were more popular with my friends and the rest of the world over time, but my memories of growing up and coming of age are tied to Stand Up and Benefit — and eight-track tapes!

As the summer of 1970 ended and school started, we lost Jimi Hendrix. That day, September 18, I decided to become a guitarist. As a young musician starting out, looking for inspiration, I was fortunate to have Martin’s guitar playing to inspire me, illuminating all the different ways to play guitar and create musical magic. Thank you, Martin Barre!