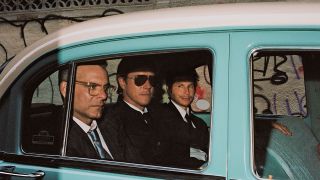 When Interpol first got together to begin working up the songs for their new (and sixth) studio album, Marauder, they convened at what guitarist Daniel Kessler recalls as a “godsend of a rehearsal space” in New York City.

“It was the Yeah Yeah Yeahs’ room, in a basement on the Bowery, that they decked out as a great little clubhouse,” he says. “You’d go down there and leave New York behind. And then, when you were done, you’d emerge back into the world like a mole from a hole.”

Unfortunately, that godsend of a space didn’t last long. “Some neighbors called the cops on us — twice,” Kessler continues. “And the second time the cops came they were basically like, ‘This is not a suggestion, but we think you guys should go…’”

Where Interpol eventually went was upstate New York, where they recorded Marauder with producer Dave Fridmann (Flaming Lips, Mogwai) at his own Tarbox Road Studios. Though Interpol — Kessler, singer, guitarist and sometimes bassist Paul Banks and drummer Sam Fogarino — had self-produced their last two records, they found working with Fridmann to be a good fit.

“Dave heard the songs we had put together and he understood they had this really strong identity. This energetic, urgent feel, which I guess came from working on them in that less-than-glamorous rehearsal space in New York City,” Kessler says. “He wanted to keep that rawness and liveness, so he had the idea to record everything to tape, and to limit the number of tracks we could do. Once we got comfortable with that method we were very not precious about it. We’d lay down a guitar track and go, ‘Okay, that sounds cool. Let’s keep it and move on.’ It was a very quick process.”

The result is that Marauder “sounds like us playing together in the rehearsal room,” Kessler says. “It’s a really textural record, and there’s a lot of dynamics and atmospherics, but it also jumps off the stereo.” That live, in-the-moment vibe is evident throughout the record; in particular on the first single, "The Rover," which marries the band’s trademark sharp-edged riffs and evocative single-note lines to a jaunty, fuzzed-out rhythm. It’s a rocking, rollicking track that, Kessler says, “has this nice straightness to it. It’s just a pure rock song.”

When it came to Kessler’s gear on the record, he kept things fairly straight and pure as well. His main setup was a late-Sixties Epiphone Casino played through a Fender Princeton Reverb, which was augmented by either a Vox AC-30 or a Fender Deluxe, depending on the tune. As for effects, he says that was more Banks’ department. “I’m not a big pedal dude,” he says. “I just go for a classic amp sound that wraps nicely around a semi-hollow body guitar. That feels like home to me.”

In an unusual move, even as Interpol were working on Marauder, they took time out to launch a four-month tour to celebrate the 15th anniversary of their seminal debut album, 2002’s Turn On the Bright Lights. According to Kessler, the act of going out and playing old music actually helped them with their new music. “Because when we went into the studio we were really tight from playing live,” he says, then laughs. “Ironically, it felt like a healthy exercise to go back and play your first record in order to record your latest record.”

And while Interpol have undergone member changes and other musical shifts in the decade-and-a-half since Bright Lights, Kessler says that other things haven’t changed so much. “I remember leaving some of those early Marauder rehearsals in New York and feeling like I was walking on air in a way that reminded me of times I’d had in the early days of Interpol after we’d come up with a new song,” he says. “To me that’s symbolic of the fact that we’re still hitting new frontiers, and that it’s still an exciting time to be a part of this band.”

Interpol's brand-new album, Marauder, was released August 24 via Matador. Check out interpolnyc.com for more information about the band.