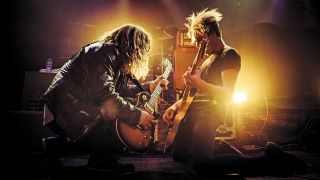 As one might expect, signing to a record label that’s co-run by an international fashion designer has its advantages. Just ask guitarist Joey Morrow, whose L.A.-based band Badflower issued their debut album, OK, I’m Sick, via Big Machine/John Varvatos Records. “Free clothes are a cool fringe benefit,” Morrow admits. “Whenever we do photo shoots, John will send us boxes of things. It’s always on loan, but we’ll give him a call and say, ‘Hey, we look pretty good. You sure we have to send this stuff back?’ And John is always very nice, and he lets us keep a lot of the clothes.”

Beyond hot threads, Morrow and lead singer-guitarist Josh Katz also pack serious guitar chops, but they stress that they’re both team players who never try to get in each other’s way. “I’m the rhythm guitarist, and I’m influenced by newer-school guys like the Edge and Jack White,” Katz says, “whereas Joey is the lead player, and he’s totally into the classic rock blues guys — David Gilmour and Eric Clapton.”

Morrow raises another difference that helps to distinguish the band’s guitar sound. “Most lead guitarists go for a bright, single-coil sound, and the rhythm players tend to favor darker tones,” he says. “We do the opposite: I love Gibsons and humbuckers, and Josh likes Teles and Fender amps. It’s weird, but it works.”

Live, Badflower opt for a no-frills approach. “It’s pretty much two guitars, bass and drums,” Katz says. However, when recording OK, I’m Sick, the band took full advantage of the studio and layered multiple guitar parts to form a forceful yet carefully orchestrated sound. “We were very open to whatever worked,” says Katz, who notes that their first single, “Ghost,” began as a mellow, somber track that mutated into a blazing alt-rocker. “Our manager suggested we make the choruses super heavy, and pretty soon the rest of the song just opened up. We slammed down on the distortion pedals, and before you knew it, we were rocking out. We were like, ‘Yeah, it’s much cooler this way. The thing sounds like an anthem now.”