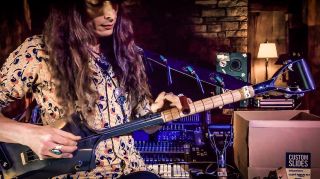 There is something magically simple about the three-string shovel guitar. From the perspective of a beginner guitarist, it’s easier and less intimidating to play three strings as opposed to six, and there's also the added benefit of the wider string spacing and high action, which makes learning slide guitar and lap steel much easier.

For the advanced guitarist, however, there are endless benefits to learning to play on fewer strings, and with no frets. When you're forced to create an entire song on three strings, without frets, and with only one finger of your fretting hand (your slide finger), you have to learn to do more with less. To me, that's always been the most appealing and essential aspect that differentiates blues and roots music from the rest of guitar playing; the ability to do more with less.

This song is tuned to Open G (G-D-G, using the A, D, & G strings from a six-string pack), and I perform it on my Justin Johnson Signature 3-String Shovel Guitar, strung with a pack of my Signature Slide Guitar Strings, and using one of my Signature Ceramic Guitar Slides. All of these products are available at my online store.

When you're playing any type of rhythmic music, like blues or funk, even if you hit a wrong note, as long as you keep the groove, the listener can stay onboard, but as soon as you lose the groove, you lose the listener. I create this groove by using a lot of right hand slap bass techniques, combined with left hand muting to insinuate a drum beat.

Sometimes I play the bass note like a lap steel, bringing my sliding hand around the top of the neck. This gives me a different feel, tone and voice, and makes it feel and sound like another 'member of the band' taking a lead break. I like to think about the bass string on the shovel as the bass 'player,' with a totally different feel than the rest of the strings. Palm muting the bass strings while leaving the lead strings open also helps create this effect.

The high string action on the shovel guitar also helps to make some techniques possible that wouldn’t be as easy on a traditional electric guitar. One such effect I use in this performance starts about the 1:25 minute mark.

First, I hit the 12th fret harmonic on the high G string. Then, while the harmonic is still ringing, I run the slide up the string, starting at the nut, which allows me to change the pitch of the harmonic. This effect sounds like a slide whistle, and can add a ghostly melodic effect.

I make each of my signature shovel guitars by hand, and I personally play and tone-test each one before sending them out. While they may look like simple, I’ve spent years refining the design, parts, setup, scale length and pickup position to create a professional instrument that still has the honest quality of being a handmade roots instrument.

The tempered steel body and hardwood handle has a long sustain, matched only by some of the largest, heaviest solid bodies, even thought the shovel is incredibly light.

I think the most important and satisfying quality of the shovel guitar is that I reminds musicians that there are still no rules to music. It doesn’t matter what tradition dictates, and it doesn't matter how fast the head-banger at Guitar Center can play the solo to Beat It. You can always take things back to their roots and create your own approach.