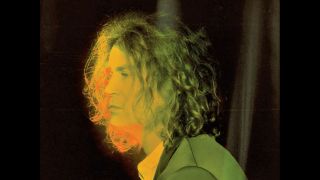 Another side of the Killers' Dave Keuning (Image credit: Dana Trippe)

In 2017, Dave Keuning announced he wasn’t planning on touring with his band, the Killers, for the foreseeable future. In several interviews, the guitarist has alluded to his disenchantment with protracted periods away from his home and teenage son. Although still actively sharing song ideas with the rest of the band for whatever project may next materialize, Keuning’s prime focus at the moment is Prismism, his debut solo album, which he’s released under the name Keuning.

Keuning handles vocal duties and pretty much everything else on the album — with the exception of some drum tracks. On first listen, it’s surprising how keyboard-heavy the album is — it's certainly not a typical “guitarist’s solo album.”

“No, I’d bought a number of different keyboards and I had a lot of ideas that I wanted to try out,” he says. “In the Killers I wouldn’t have the last word on keyboard parts, but obviously on my own album it’s all my way. Going out live I’ll be playing a lot of the songs from the album on keyboards as well.”

Keuning has always been a “the song comes first” guitarist. Sure, there’s a ton of guitar all over the Killers’ songs, but not necessarily straight-ahead riffing/power chord rock 'n’ roll guitar. Keuning’s approach is much more textural; he uses guitars to paint broad sonic soundscapes that set the perfect backdrop for Brandon Flowers’ distinctive vocals. Having carved out a niche for himself in a crowded guitar-hero market by his use of tone-processing effects, did he ever get anxiety about rig failure?

“Yeah. I’m actually dealing with that at the moment as we are rehearsing the songs to take the album out live. I’m trying to minimize the number of effects I take on the road to try to simplify things.”

How did Keuning take to the role of lead singer? “I had done backing vocals in the past, of course, but this was a whole different situation. I did give it a lot of thought, but it is so much more straightforward to sing the songs myself than to get other vocalists in and try to explain exactly how I want things. There’s also the fact that getting another singer changes the feel away from being a solo project and has quite different implications. The extra responsibility of fronting my own band presents interesting challenges. There’s a lot more pressure on me, but that makes things fresh and interesting.”

Keuning had been thinking about a solo album for quite a few years, but the decision on whether to offer a song for the Killers or to save it for his own project was never an actual considered process. “Some of the ideas I had were tried with the band, but then they didn’t really pan out. Some of the ideas I had would never really have worked as Killers tracks — particularly the acoustic songs — so the track list kind of developed itself organically.”

Often cited as one of the few “name” guitarists playing Fender’s doomed Starcaster (although he admits he isn’t really using it that much these days), he’s been leaning heavily on Gibson ES-335’s for the bulk of his more recent electric work. He confessed to owning approximately 100 guitars, a number he’s hoping to thin down by selling a few axes. Given his oft-stated admiration for Angus Young, I asked if he was ever likely to be breaking out an SG. “I’ve got a couple of good SGs, actually; I really like the upperneck access.” Had he never been tempted to shock a Killers’ audience with a blast of AC/DC riffage? “We’ve played various AC/DC songs on soundchecks, and I once started out [the Killers’] ‘Mr. Brightside’ with the intro from [AC/DC’s] ‘Thunderstruck’.”

Going forwards, the solo route is definitely uppermost in Keuning’s mind, although he’s not ruling anything out regarding the Killers for the future. Does he feel proprietorial about his trademark intros and riffs when he sees another guitarist up there playing his parts?

“It’s kinda weird. On the one hand you’re watching somebody who’s trying to sound just like you, but then if they didn’t do it the way I did it I’d probably feel there was something off there as well!” The obvious bugbear is inevitably the expectations of fans turning up hoping to hear their favorite Killers tracks mixed into the set. “I’m kind of damned if I do and damned if I don’t on that one. At the moment I’m concentrating on playing the songs from the new album, but a little further down the line I wouldn’t shy away from including the odd Killers track. Why not? They’re songs that I love too.”