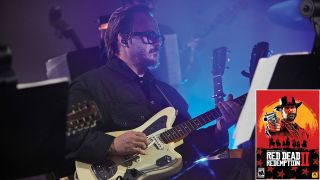 “Composing music for video games is pretty thrilling,” he says. “I get to work with so many genres and can do whatever I want. Basically, as long as it sounds good, it’s cool.”

Jackson — who’s originally from Pennsylvania — eventually moved from Virginia to Los Angeles and played briefly with the post-rock band Friends of Dean Martinez before becoming a session guitarist on movie soundtracks. When one of his friends suggested he try working on video games, Jackson jumped at it. “I got hooked up with Rockstar Games and worked with [co-composer] Bill Elm on Red Dead Redemption,” he says. “I really enjoyed it, so I kept at it. I have so much freedom to improvise — it’s great.”

Operating out of his own Vox Recording Studios on Melrose Avenue, Jackson informs his scores with a love of classic movies. “I saw [Akira] Kurosawa films as a kid and loved them, and stuff like The Good, the Bad and the Ugly made a big impression on me. [Composer] Ennio Morricone broke the mold in how a Western score could be anything, as long as it fit the spirit of the picture. I try to bring that sensibility to what I do.”

Using his “main spaghetti Western guitar” (a 1962 Fender Jaguar) to evoke the mood of America’s outlaw era, Jackson recorded hours of music for Red Dead Redemption II. “It’s called ‘dynamic music,’ meaning the score changes, depending on the actions of a player,” Jackson says. “So I have these big canvases to fill, which is a lot of work, but it’s also a lot of fun. Sometimes I stretch things out to 20 minutes of music. It’s very free and non-linear.”

Would he recommend the world of video games to other guitarists? “That’s a hard question,” Jackson says with a laugh. “I would say just do what you love and cross your fingers!”