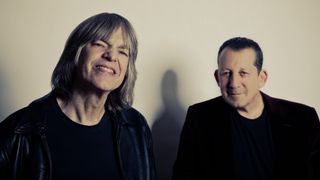 Jeff Lorber first heard guitarist Mike Stern in the early 1980s when his Jeff Lorber Fusion project toured the same festival circuit as Stern, who at the time was performing with Miles Davis. But it wasn’t until bassist Jimmy Haslip, who’d worked with both Stern and Lorber over the years, suggested these two seemingly disparate musical forces come together that their new collaboration, Eleven, was born.

The resulting album is an extremely copacetic compilation filled with harmonic meat and aggressive soloing. From the melodic and catchy opener, Righteous, to Stern’s lyrical, African-flavored Nu Som and blues-drenched jams like Jones Street and Slow Change, Eleven is an inspired collection combining tasty elements from many different styles of music.

We recently spoke with Mike Stern and Jeff Lorber about Eleven and more.

How did this collaboration come about?

Jeff Lorber: It’s a small music community, especially when you get into guys who play fusion and jazz. And although we’d never met I’ve known about Mike for a long time. An early version of my Jeff Lorber Fusion Band had even opened up for Miles Davis back in the Eighties when Mike was in the group. I’ve been working with Jimmy Haslip for more than ten years, and when Jimmy was with the Yellowjackets he did a collaboration with Mike. Jimmy was the one who suggested it’d be something interesting for us to do.

Mike Stern: It was fresh because me and Jeff were in different orbits and had never played together. So when Jimmy presented the idea to me I thought it would just be to play a few gigs, but then he suggested that Jeff and I record together. One thing led to another and now here we are.

Jeff, what was it about working with Mike that appealed to you?

Lorber: The Jeff Lorber Fusion has always been saxophone-focused, so working with a guitarist as the main sound was really appealing to me. Of course, Mike is a virtuoso player who has terrific command of bebop vocabulary as well as rock and blues. He also has a free and fluid approach in the way he improvises and plays melodies. I thought it would be a great challenge because he's such a high-level musician and I was excited to see what would come out of it.

Lorber: Each of us basically wrote half the album. Mike had a chance to re-cut a few songs he wanted to take a new look at and I wrote a bunch of new music as well. We got together and cut all of Mike's stuff live with Jimmy on bass and Dennis Chambers on drums. For me, I’ll usually start with a chord sequence or groove and try to get melodies involved early on. The song Righteous is a good example. It’s a four-chord pattern with a Motown groove. After I write something I usually let it marinate for a while to see where it needs to go. The element of time is something that really helps.

Stern: Inspiration comes at weird times and you always have to be ready for it. Sometimes I could just be walking down the street and feel a bass line. Other times I’ll find myself singing a melody and I'll write it down. It may just be a little germ of an inspiration but you never know when that stuff is going to add up to a tune.

Whatever I write can sometimes have a little pop flavor or classical vibe but there’s always a thread of blues. I also like to have the energy of a live vibe when I record. Jeff works a little bit differently with arrangements but I really liked the edge that brought to the project. His songs and the combination of what I brought worked well together.

What was the approach to Mike’s solos on the album?

Stern: Jeff was very open about what he wanted so I did whatever I thought would fit. I started off a little more lyrically and just went from there.

Lorber: My melodies were all written out but Mike was completely free to play anything he wanted for solos, and I loved everything he played. It’s an entertaining album with a lot of variety and different vibes.

Stern: I’m still using my Yamaha Tele-style signature model. It's very comfortable. Amp-wise, I usually use two [Fender] Blackface Twin ‘65 reissue models with a harmonizer effect that serves as a hipper chorus to fatten up the sound and make it a bit more vocal. On the record I also used Roland Blues Cube twin 12s. They have a naturally good sound.

You’ve played with a lot of the biggest names in jazz, like Miles Davis and Jaco Pastorius. What was the biggest thing you took away from those experiences?

Stern: They both challenged and inspired me with how they worked but they also played their hearts out and had so much passion and love for the music. Jaco used to write some absolutely amazing shit. Those were the main things I took away.

What excites you the most about the new album and this next phase of your careers?

Lorber: One thing I’m excited about is our European tour in November. That will be fun. This is new music and it will be a challenge to play with Mike and these other guys but I’m up for it. For a guy like me to challenge himself to do new things is healthy and keeps you on your game.

Stern: Live gigs are a lot different than the records. There will be a lot of spontaneity and I’m looking forward to seeing what Jeff does. It’s going to be an interesting combination and a lot of fun.