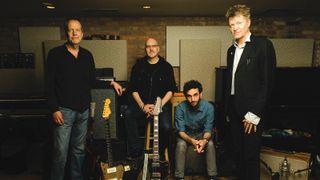 Nels Cline is best known to mainstream rock fans as the lead guitarist in alternative ensemble Wilco, but he also keeps up a ridiculously busy schedule of jazz, improvisational and avant-garde music projects. His newest is the Nels Cline 4 — a quartet that also features guitarist Julian Lage, bassist Scott Colley and drummer Tom Rainey — who have just released their debut album, Currents, Constellations.

The new project grew out of a guitar-duo collaboration Cline and Lage put together several years back, and which was captured on the 2014 effort, ROOM. That album, Cline says, “was one of the most enjoyable things I’ve ever done. When Julian and I first started playing as a duo, we’d be hanging out and improvising and trying ideas, and sometimes we’d say, ‘Hey, what if we had a rhythm section? What would we do? What would it be like?’ ”

The answer can be found on Currents, Constellations, in which Cline and Lage’s exploratory and highly improvisational guitar work meld into adventurous, dynamic rhythms and arrangements. Says Cline, “I was looking for this sort of connection between so-called free jazz and my own compositional style, which is not really jazz.” He laughs. “It’s a little more… I don’t know what it is. I like to call it fusion, just to piss people off.”

In truth, much of the music — from the funky rhythms, slippery unison and harmony guitar lines of “Imperfect 10,” to the dissonant melodies and racing rhythms of “Furtive” — defies easy categorization. Throughout, there’s a sense of exuberance and playfulness at hand, not only between Cline and Lage (“He always pulls out stuff that blows my mind and makes me giggle,” Cline says of his six-string partner), but also in some of the arrangements. Take, for instance, “Swing Ghost ’59,” which finds the quartet making jarring shifts between swing- and straight-time tempos. “I thought it would be fun to imagine this conflict between the swing feel, as it used to exist in pop culture, losing the battle to even, straight time,” Cline says. “And the piece shows that happening in a kind of inelegant way, with the swing feel bludgeoned out of existence by this heavy rock thing. It was just kind of a fun idea.”

At the end of the day, “fun ideas” are at the heart of the NC4, which Cline hopes will be an ongoing pursuit. “We’re going to do some gigs this year, and we’re working on more for next year,” he says. “My dream would be to record a live album. So we’ll see what we can make happen. Because playing with these guys is a blast.”