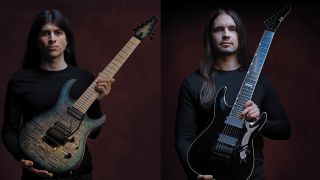 When original Obscura guitarist and songwriter Steffen Kummerer finished working on the band’s second album, Cosmogenesis, he knew it would be the first of a four-part concept series. He just had no idea it’d take him another nine years to complete the story.

Then again, between the German technical death metal band’s inception in 2002 and the just-released chapter-closing Diluvium, Kummerer watched 13 bandmates come and go, including two former members of the pioneering tech-death band Necrophagist; guitarist Christian Münzner and drummer Hans Grossman quit in 2014 to pursue other ventures. But the greatest hardship came in 2015 when Obscura were denied visas to enter the U.S. and had to drop off the Summer Slaughter tour.

A somewhat less-traumatic setback involved hiring fretless guitarist Tom Geldschläger to help track the 2016 album Akróasis. Halfway through the session, Kummerer realized the guitarist wasn’t nailing his parts so he sent him packing. “I had to re-record half of the record myself,” Kummerer says. “But something good came out of it. Rafael Trujillo joined and did all the touring.”

Trujillo, a classically trained guitarist from Salzburg, Austria, was studying at a conservatory in Amsterdam when the band’s current drummer, who also was from Salzburg, tracked him down and asked if he would send an audition video. Trujillo complied, and when Obscura saw it they immediately brought him onboard.

“It was always a little dream of mine to play in a band,” Trujillo says. “But at the beginning, it was a lot of work to learn all the songs on seven string. At the same time, switching gears like that taught me a lot and prepared me to help write Diluvium.”

The first album of Obscura’s concept series, Cosmogenesis, addressed the beginning of the universe; 2011’s Omnivium was about evolution; Akróasis explored the development of the subconscious and Diluvium is about the apocalypse. Enriched by Trujillo’s stylistic influences — Meshuggah, Opeth and Dream Theater — Diluvium offers a striking blend of punchy eight-string rhythms and virtuosic shredding. And in pure prog style, it includes motifs that tie in with the other three albums in the series. “There are a lot of Easter eggs the listener can find,” Kummerer says. “Of course, the songs on Diluvium are on a higher level musically than the ones on Cosmogenesis because in 10 years we have become a better band. It would be very sad if the two albums were musical equals. In music, you need always to step up.”