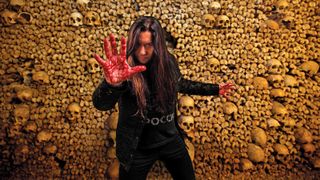 The main creative force behind veteran thrash band Testament, Eric Peterson, has just released Dominion, the third full-length album from his black/death metal project Dragonlord. Over the decades, Peterson has worked on Dragonlord on and off when he’s had down time, which is why Dominion took more than eight years to finish. Even so, Peterson has cherished every opportunity to work on the record.

“Dragonlord is fun and it’s different from Testament,” he says shortly before Testament open for Slayer in Wantagh, New York. “But even though I enjoy it, it’s still stressful. There were times over the past couple years when I would wake up and have this panicky feeling, like, ‘Fuck, something’s wrong…. Oh, yeah, I don’t have this fuckin’ thing done yet.’ But when Dragonlord finally finished ‘Love of the Damned’ in 2014, I felt like a million dollars and I could sort of see the light at the end of the tunnel.”

With Dominion, Peterson hopes to not only expose Dragonlord to a wider range of fans but also to establish a greater separation between the band — Peterson (guitar, bass vocals), keyboardist Lyle Livingston, drummer Alex Bent and background singer Leah — and Testament.

“Testament is more based on guitar, so it’s more driving and there’s more crunch,” Peterson says. “With Dragonlord, the guitar has to work with the orchestration and the drums are a little faster. There are so many elements going on at the same time — French horn swells, flute, female vocals, choirs. So I just record a single guitar on each side. The guy who helped me mix the record was going, ‘Why did you put 50 things on the chorus?’ And I was like, ‘Well, it was in my head. If I can hear it then I know it can be done.’”

Since the mix was already pretty dense with instrumentation, Peterson set the gain on his guitar to half-strength, pulled back the mids and turned the bass a little more than halfway up. Only the treble was cranked, enabling the guitars to cut through. “It was an AC/DC tone, almost,” Peterson says. “There’s a clear sound and it’s not overpowering.”

Throughout Dominion, Peterson combines deep growls with upper-register screams reminiscent of Cradle of Filth. But what really makes the band stand out from traditional black and death metal is the way Peterson combines styles, incorporating the rhythmic techniques of French progressive and symphonic black metal bands, including Misanthrope and Anorexia Nervosa, with the traditional metal of groups such as Dio and Mercyful Fate. And when it comes to leads, Peterson often reaches completely outside the metal genre.

“I was playing in the style of a lot of guys I grew up with like Frank Marino [from Mahogany Rush], Pat Travers, Boston and Montrose,” he says. “I do fast stuff as well, but I mostly use it to switch gear from one melodic part to the next.”

While Peterson would love to tour for Dominion, he realizes it would be impractical since two years have passed since Testament’s Brotherhood of the Snake and the band don’t have any new songs. “I’m not gonna take any more eight-year breaks from Dragonlord in the future, but right now I gotta focus on the next Testament record.”

Peterson wrote all of the music for Testament’s last album in about three months and then emailed the songs to his bandmates. This time, the guitarist hopes he’ll be able to take more time writing and the process will be more collaborative.

“I’ve talked with [lead guitarist] Alex [Skolnick] and he has some ideas,” Peterson says. “Right now, I’m librarying riffs and it looks like it’ll be pretty heavy and old-school. At the same time, I’m being careful not to copy what we’ve done before. I can’t say for sure when it’s gonna be finished, but it’s gonna be killer.”