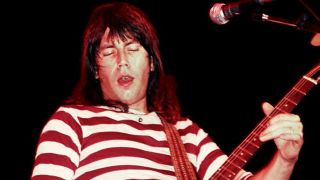 There were a lot of great guitar bands in the late Seventies, but one of the greatest to see in concert was the Pat Travers Band. The ultimate lineup — consisting of Pat Travers and Pat Thrall on dueling lead guitars and the rhythm section of Peter “Mars” Cowling on bass and Tommy Aldridge on drums (before he left to join Ozzy Osbourne’s band) — was a powerhouse dynamo, but unfortunately was rather short-lived, lasting only from 1978 through early 1981. This lineup recorded two excellent studio albums together — Heat in the Street and Crash and Burn — but is particularly remembered for their stellar concert album, Live! Go for What You Know.

While I’m going to focus primarily on Travers’ rig for “Boom Boom (Out Go the Lights)” I want to mention a few key details of Thrall’s setup. Fortunately, it’s easy to tell who is who, as Travers’ guitar is panned to the left and Thrall’s is panned right. For most of the first minute, directly after the instrumental intro, Thrall is the only guitarist heard, comping out jazzy chords treated with a deep chorus effect generated by his A/DA Flanger pedal. Thrall also used a Roland RE-301 tape echo, an A/DA Harmony Synthesizer and a Systech Overdrive.

A reader recently pointed out [October 2018 Sounding Board] that Travers used an A/DA Flanger instead of a “phaser,” as mentioned in Jeff Perrin’s [July 2018] Performance Notes. Actually, both are wrong and right. The source of the “slight phaser effect” is a Leslie 147 rotating speaker cabinet, which Travers used 100 percent of the time and blended with two additional tones split from his pedal board going to an overdriven Marshall 50-watt (with a pair of Echoplexes also in the signal chain) and a clean Marshall 100-watt head. Travers does use his beloved A/DA Flanger, but in his live rig he used it only for a deep, jet-like swoosh (heard here at 3:47, and also on the intros to “Hooked on Music” and “Gettin’ Betta”). In the studio he used it for chorus (like Thrall on this song) and even radical “auto whammy” pitch bends. But there’s an actual phase shifter in use as well — an MXR Phase 100 is engaged occasionally for added modulation “grind,” particularly during Travers’ solo. Travers also used the Phase 100 in conjunction with an MXR Blue Box for rumbling, motorcycle-like growls. I’ve added those settings as a bonus, even though it’s not used here.

TONE TIP: The slow setting of the Lester K pedal (set to about 6) nails Travers’ thick, chewy phaser-like Leslie tone that’s essential to his sound, particularly when it’s placed in front of an amp with a generous amount of power amp overdrive grind.