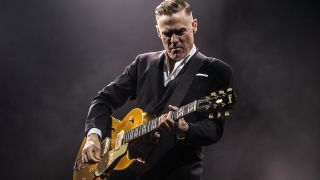 Bryan Adams has sold more than 65-million albums and performed to sold-out arenas all over the world. With classic hits such as Cuts Like A Knife, Summer of '69 and the Grammy-winning (Everything I Do) I Do It For You, his music has been heard by most people in one way or another, and his influence on younger musicians is long-lasting.

Guitar World recently caught up with Adams to ask him about his guitars and a few stories behind the albums in this exclusive new interview.

"I have a couple of early-1950s ES-295s but the first one was bought from my guitar tech in the early '90s. I use them all the time, particularly on the road. I love the look, as it’s really a jazz guitar, but the P-90s cranked up are explosive. I sometimes think it sounds like Malcolm Young when I’m playing it, even though I know he played a Gretsch Jet."

"Each guitar and old amp seem to have their own particular characteristics. Except on my first recordings, I’ve always used vintage gear, and I know I’m not alone. Take, for example, the U2 song, One, that Edge played a Gretsch Green Country Club on, or Brian Setzer playing any of his songs on his 6120 for that matter. Fucking unreal sound. It just wouldn’t be the same on another guitar."

You’ve been working with guitarist Keith Scott for more than four decades. How did the two of you meet?

"Keith is a guitar God, even way back when we first met in 1976 in Toronto. Any band that had Keith in it was guaranteed to have someone at the front of the stage (mostly girls). I suggested we go for a coffee from a chance meeting when I was 16. We became instant friends and stayed in touch.

"A few years later, when I was my about to do my first proper solo tour, I came over to his apartment, played him my songs, and asked him to be in the band. I’d been rehearsing with Ric Parnell on drums from Atomic Rooster, and I think that might have sealed the deal."

Growing up you were influenced by guitarists like Page, Clapton, Blackmore and Ronson. What was it about them that appealed to you?

"It was their sound, Jeff Beck and Eddie Van Halen, too. Beautiful musicians and each of them have a sound that makes the songs really exciting. I’ve had the pleasure to meet them all. I just wish I had a chance to actually work with them. Mick [Ronson] and I were going to do something but, sadly, he passed away before we could get around to it."

2020 marks the 40th anniversary of your self-titled debut. What thoughts come to mind when you look back at that album?

"I think back on that as a very lucky break. That first album was basically expensive demos that did nothing, but what it did do was enable me to go on the road in better clubs at 20 years old and figure out what to do next. That was an invaluable lesson.

"The next step was recording with a band in NYC with Bob Clearmountain, who I’d wanted to work with because of the Jim Carroll album, The City Drops Into The Night. So, I flew to NYC and played Bob the demos for what would become my next album, You Want It You Got It."

At what point did you realize you had made it as an artist?

"The day I could pay my rent for more than a month without having to rely on anyone for support. Here’s an interesting fact: after Cuts Like A Knife came out and had gone platinum in the USA, I asked my manager where the money was. He told me there was very little because I’d signed a shitty deal and, basically, the money I made had gone into paying everyone back for tour support. Thankfully, I had another record in me after that called Reckless."

Cuts Like A Knife has one of your most recognizable riffs. How did it come about?

"Jim Vallance and I used to jam to drum loops until we got something we liked. That was just me messing around with an open D string on my Strat. There is a tape somewhere with me mumbling something that sounds like “and it cuts like a knife” and Jim mumbling back, “but it feels so right.” It was a magic moment."

What were the writing sessions like for the Reckless album?

"Jim had a little studio in Vancouver and we’d get together at his place for lunch and try and write songs. That particular time period was one of the most productive times of for us. It seemed we just kept getting decent songs every time we sat down. At one point I put Jim through the shitty process of having to remake a demo of the same song (Summer of ‘69) a few times.

"Then I drove Clearmountain nuts because the first version of the song didn’t have the right energy. So, I recorded two entire masters of 69 until it was right.

"Interestingly, even as the fader went down on the final mix, I still wasn’t sure I’d gotten it right. I kind of burned everyone out making that album, including myself, but I knew what it needed to feel like."

You’ve worked with some heavyweight producers. What was the biggest thing you learned from them?

"I owe a lot to all of those guys, Jim included. Mutt [Lange] taught me not to be so precious about ideas and that the best idea wins. I’d played him songs I’d spent a year working on and he’d say let’s start again. It was gutting at first but he was right. Bob Rock was great at rallying everyone together and making tracks happen.

"It always resulted in something special. And Jeff Lynne…well, I can’t believe he had the time for me. Aside from making my favorite record [Get Up] next to Reckless, he’s one of the most generous blokes ever. I remember asking him how much he wanted me to pay for his studio time and he said, 'I don’t charge my mates.'"

Of all the highlights of your career, is there one that you count as particularly special?

"It all gets back to paying the rent. I’m still super-grateful for that."