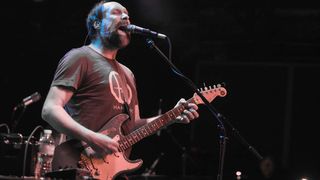 One of the last great guitar rock records of the '90s opens with a humble D chord. For a second it hangs there unaccompanied, almost offhanded in its simplicity. Then a voice enters, and cryptically states: “The plan keeps coming up again.”

The following measure, on the three, the song explodes. Keep It Like a Secret, Built to Spill’s 1999 album, was their second for a major label. Despite producing zero singles, 20 years later it remains one of indie rock’s defining guitar albums, a record stuffed to busting with riffs, arpeggios and solos, each catchier than the last, all of them cascading into each other.

“It’s ambitious, and I like that about it. But that’s also the thing I don’t like,” says Doug Martsch, Built to Spill’s singer, guitarist and sole constant member. Famously self-critical, Martsch says the album’s kaleidoscopic guitar work wasn’t necessarily intentional, but the result of his own insecurity about his playing.

“I added a lot of things more to cover up myself than to make it big-sounding,” Martsch explains to us from a Seattle green room, prior to the COVID-19 pandemic.

“Now it’s been really fun playing these songs live and not even thinking about all that stuff, kind of interpreting them differently. To me, all those layers are not that essential or important.”

“There’s this balance in music where things need to be conventional, be pleasant to the brain and kind of make sense, but also be challenging,” Martsch says.

“That’s just what you’re constantly trying to figure out: what things are cool, and crucial, and what parts take the listener out of the song.”