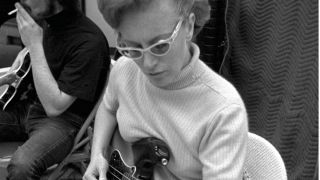 It is nearly impossible to select a recording from the 1950s into the 1970s that doesn’t feature Carol Kaye. She was top call for producers and engineers, tracking albums, television scores, and movie soundtracks.

Her classic lines were recorded using a Fender Precision bass, which she once described as, “Not a great instrument, but it got a certain sound that no other instruments got.” She perfected that sound by using flatwound strings, a pick, and sometimes muting or raising the strings.

“The Precision wasn’t a jazz instrument, but it was very, very good for that day and time,” she told me in 2014. “It got a great sound in the studio for rock and roll and pop music. I knew that eventually other instrument companies would make a better bass. For me, it was like a board with strings. But, back then, there weren’t choices like there are now.

“Back in the late-'50s, I had a great jazz bass and an acoustic guitar that I used for playing jazz. The Fender instruments came on strong with a nice, clean sound to record in the studio. It was a hot sound; they had great pickups.” In 2001, she began playing an Ibanez SRX700, “because it gave me the jazz sound that I wanted... You want an instrument that gets all the sounds, not just rock and pop.”

Session work in the 1960s, while well‑paid and rewarding, was gruelling. The musicians routinely cut three or four records per day, working 12 to 15 hours. By the end of the decade, she recalled, Hollywood had become unsafe, the music “got boring” and she stepped away, doing only select sessions and tours.

In the late 1970s, an automobile accident put her career on hold; following surgery in 1994, she was able to once again play, perform, record and teach.

Today, Kaye is primarily focused on being an educator. She maintains a thorough website and is active on Facebook, where she communicates with fans and generously shares music, memories, and detailed rundowns of how her famous bass-lines were written and recorded.

She has authored numerous educational books, beginning with 1969’s self-published How To Play The Electric Bass, and released many instructional DVDs and CDs. She is on Skype almost daily, teaching private jazz guitar and bass lessons to experienced musicians.

“As you age, you find that you’re not doing the things you used to do. You’re not doing studio work any more, you’re not out there playing live, and you have so much inside of you that you want to pass along,” she told Reverb in 2016.

The music industry has changed tremendously since Kaye first set foot in a studio. However, one thing remains constant: Her legacy as a trailblazer, groundbreaker, influence and inspiration for countless musicians. Women bassists are now status quo in every genre of music, and they owe a debt of gratitude to her for smashing that glass ceiling and paving the way.

“There’s something about playing music that makes you feel at one with the world,” she told Reverb. “It’s a way of communicating with others. You feel it in the clubs and gigs. When you play concerts, you feel the flow of the music between the audience and yourself. It’s that feeling right there that I want to convey to the students. To pass along what you know is one of the best things that anybody can do in this life.”