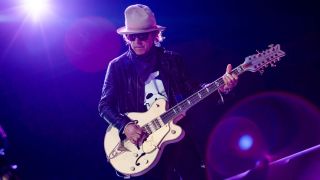 From the time that Tom Petersson first picked up a bass at age 14, a deep desire burned inside that would become the driving force of his musical career.

This passion was not to become the greatest player or even the most well-known bassist, but rather, to find the perfect tone that had been lingering in the recesses of this mind since his boyhood days of idolizing Paul McCartney and John Entwistle. In doing so, Petersson pioneered many trends, such as playing a 12-string bass, and using large guitar cabinets miked with classic microphones, all as part of his attempt to wrangle the tone of his dreams.

Of course, Petersson—whose sonic search started out on a 1964 Gibson Thunderbird and most recently features his signature Gretsch White Falcon 12-string—is best known as the anchor of Cheap Trick, for whom he also writes and provides background vocals.

In addition to being voted first-ballot-inductees into the 2016 Rock and Roll Hall of Fame, the group has released Bang, Zoom, Crazy … Hello, its first album in seven years. The record was written in hotel rooms and tour buses over a four-year span that also saw Petersson appear on Donovan’s latest effort, Shadows of Blue [2013, Treasure Isle Studios] and create a foundation called Rock Your Speech, which uses music to aid kids with autism.

As expected, the record is a testament to Petersson’s tone crusade. Shifting from the driving, concentrated lines of “Heart on the Line” to the gain-fueled riffs of “Do You Believe Me” to the thick, crunchy tone of “The In Crowd,” Petersson utilized most of his artillery of basses to dial in a very specific sound for each song.

17 albums into his storied band’s career, the 65-year-old still hasn’t quite found the elusive tone he’s been searching for, but he’s happy to keep exploring.

Did you have specific goals for your bass sounds on the album?

My initial focus is always whatever suits the song—what the song needs. It might require a McCartney kind of sound, so I’ll use a Höfner. The song might need a piano-like bass sound or cello kind of tone. I’m always looking for the elusive “perfect tone.” It doesn’t ever have a definite end point, but it’s fun to chase.

How would you describe your tone?

I love for there to be string noise within the tone, and I love using both guitar amps and bass amps. That provides a glassy kind of guitar sound with great low end at the same time—sort of like Duane Eddy on bass. I want my tone to sound like a grand piano, cello, guitar, and bass all at once, through a big stack of amps. We don’t have a big band with a lot of members, so we need to get big sounds out of everybody.

Which basses from your collection did you use?

I used my ’60s Gibson Thunderbirds, my Höfner, my two P-Basses, and my Rickenbackers when I needed a really stringy sound. I used my 12-string to record certain sections on a few songs, but I don’t record with it a ton, even though it’s the only bass I use live.

How did you track your bass?

I get my sound from putting mics on cabinets. That’s a big part of my tone on our albums, so I tend to stick to that method. I don’t like the sound of a DI. I rarely use one the studio.

I play with a pick and use a lot of palm-muting. That’s why I can’t play Rickenbacker basses too often; they’re pretty much impossible to mute with the bridge design and the pickup cover in the way. I play mainly downstrokes, and I love using distortion. I get a very natural distortion out of my guitar amps, which is another reason why I use them.

Do you approach playing a 12-string bass differently than you do a 4-string?

My playing doesn’t change whatsoever from a 4-string to a 12-string. The 12-string just happens to perfectly suit my style because I started on guitar. I’ve always loved playing a 12-string electric guitar, so the transition to a 12-string bass was no big deal. My style is a key part of it, as well. So much of a player’s sound comes from their hands. You can have someone play any bass and it will sound like them.

How did you guys start the process of recording the new album?

We love to write and record; it’s something we continually do. We had accumulated a lot of ideas, which led us to begin recording them in Los Angeles and Nashville. It felt very natural to be back in the studio. There was no overwhelming feeling of a reunion or anything, even though we hadn’t recorded an album since 2009.

What was the writing process like this time around?

We wrote individually and then created the finished songs when we got together, which is how we’ve always done it. If an idea strikes someone, we’ll run with it and add a chorus and a bridge, and make it complete. If you have something that no one else picks up on, you can always reintroduce it later and maybe it will catch the other members’ attention.

How do you write your ideas when you’re playing alone?

When we travel I always carry an instrument with me. I look at it as a hobby. And now it’s convenient because phones have recorders in them, so you don’t have to travel with a cassette player, like we used to. I’ll go through the ideas I came up with on the road, as well as the ones I recorded at home, pick which sound the best, and try to expand on them. It’s very important to record your ideas as you go, because it can be difficult to remember what you’re writing from one moment to the next.

How does it feel being inducted into the Rock and Roll Hall of Fame?

It’s a huge compliment. It’s not something we grew up with, nor something we aspired to from the beginning. Athletes always want to get into the hall of fame, but for musicians it’s different because we’re just doing the best we can do. But when it happened, I’ve never had more people congratulate me.

I’ve never had so many people approach me, in general. It seems like it means more to the people on the outside, because it kind of validates what you’ve done. Before this, people would come up to us and say, “Wow you’re still touring?” Or, “Oh, you’re alive? We thought you were dead!” [Laughs.]

Was it a shock when you got the call?

It was, because we know it’s not easy to get in there. We know our peers voted us in, and that alone is a huge compliment. Probably the hardest part is to get nominated in the first place. We were pretty shocked to find out we got in on our first time around. It didn’t change our mentality or our working relationship or anything, though. It’s just a nice honor.

You’ve worked with Donovan, Willie Nelson, Frank Black, Mick Jagger, and many others. How do you approach playing with other artists?

Unless they chose me to try to get a specific sound that I’m known for, they typically want me to create more of a standard sound for their music. I always make sure I have a few instruments available, like a P-Bass, a Thunderbird, and a Höfner.

For Donovan’s recent album in Nashville, I plugged in my Höfner, and he loved that it sounded like an upright. He was going to hire an upright player to re-record some of his songs, but he had me do them on the Höfner instead.

Which bass players have influenced your playing the most?

I love John Entwistle and Paul McCartney, even though they have two entirely different styles. They were both great about playing busy but making it work. Most people cannot do that successfully; your playing can really get in the way doing that, and it’s not as easy as it sounds.

As incredibly successful as McCartney is, I think he’s still underrated as a bass player. People don’t realize how good he is. Nobody else would come up with the bass lines he does; I wish I had written a lot of them. And Entwistle, too; nobody sounded like that.

How and when did you first start playing bass?

I was a rhythm guitarist when I started out. I was never great at playing fast stuff. In the ’60s, people started becoming very accomplished on guitar, and I wasn’t Jimi Hendrix or Jeff Beck, so I decided to switch over to bass. We already had two guitar players in the band, so it just kind of fit.

When I started, I played bass like a rhythm guitar. It wasn’t the way a bass teacher would teach you to play, but it gave me my own style and sound.

What’s some of the best advice that has inspired you musically?

This is why I don’t get American Idol; they make the singers sing every kind of music. Would I care if Jimi Hendrix could sing like Adele? No—Who cares? It’s ridiculous to me.

You’d never hear, “Boy, Hendrix really blew that Taylor Swift song.” You have to find your own style, and if your style isn’t working, you just have to hang in there and develop it over time.