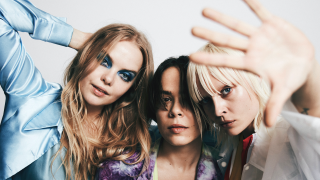 In the two years following their self-titled debut, London trio Dream Wife have traversed the whole world over and bared witness to all its intricate ups and downs, all the while navigating a lifetime’s worth of their own personal exploration.

Their experiences come to a head on So When You Gonna…, an album that pushes far beyond their indie-punk roots to roam through nuanced pillars of pop, rock and avant-garde indie flavours. Australian Guitar met (virtually, of course) with guitarist Alice Go to vibe on how the band channelled the whole of their personal spirits into a record as powerful as it is polychromatic.

How did you want album two to really define what Dream Wife is in 2020?
We really wanted to elevate and broaden our sonic palate from album one through to this record. We recorded the first record in something like a week and we had live shows in-between, so it was a very live, in-the-moment experience, trying to get that raw energy down on track. But going into the recording process of this second album, we had a whole month to record, and we were working with this amazing team.

Marta Salogni was this amazing producer who we got to share a conversation with, and we were able to dig into the sound [of Dream Wife] and really take the songs to a broader place, sonically, that we ever got to on the first record. It was a really exciting chance to explore what’s possible for us to achieve as a band.

We’d been playing live for something like two years prior to writing the album, and we were like really locked in as a live band, so the sound and the vibe from the first record is carried through – that’s kind of in our soul, y’know? That kind of rawness and that sense of fun. But also, I feel like we’ve kind of embellished upon that, and we’ve come up with these songs that can sound stiller and hold a statement – they don’t have to be as punk, I guess I would say, as a lot of the songs from the first album.

For us, it was about pushing the extremes – taking everything that was great about the first record and everything we can do as a live band, and pushing that in the studio with Martha to develop something we hadn’t been able to do as a unit before. It felt like quite an organic evolution of what we’d achieved on the first record, being able to push things more in that studio setting where we could actually explore sounds in a new way for the first time.

What was the creative dynamic like between the three of you?
We did a lot of the preproduction ourselves and with our drummer, Alex Paveley – we would be in a room together, and we all just clicked. We feel like a really well-oiled machine after playing so many shows, and I think the songs came very naturally to us. It’s a really fun and trusting space, and I think, y’know, dealing with sensitive topics such as miscarriage on the song “Temporary” – from from pouring so much of our personal lives into this project, we’ve reached this stage with each other where it really is like a sisterhood.

There’s a lot of trust in that creative space, and I think that really allowed us, in the writing process, to push forward and explore these softer sides of our sound, and the more statement-based sides of who we are as a band. And from the writing process through to the recording, that trust kind of carried us along. Working with Martha as our producer, Grace Banks as our engineer and Heba Kadry mastering [the album], we had a very sensitive team who helped us feel like we could truly take advantage the space we were in.

We had a month at Pony Studios [in London] with Martha, and we were able to hold this conversation together where there was no ego – it was unlike anything I’d ever experienced in a studio; it was everyone engaging in this conversation together, where, really, anything was possible. And I think that really allowed us to tackle more sensitive subjects in a way that felt respectful and right. It was a real dream team throughout, really.

And then also, y’know, coming back from two years of straight touring… We took six weeks off over Christmas in 2018, and when we came back to the writing space, it was a very refreshed atmosphere. I think it was really nice to actually just re-enter that space as friends. We’d been through all of these crazy adventures together, and I think that allowed us to really push the lights and shades, and the contrast between moods on this record as a whole.

The curation of this record as a whole was very intentional. You start with a song like “Sports”, where it definitely carries that sense of fun and raw energy through from the first record – but then you end the record with a song like “After The Rain”, which couldn’t be more diametric. And those extreme bookends, for me, were the result of able to really dig into our artistry with the team around us, trusting ourselves and trusting our vision, and pushing ourselves in the right ways.

So it’s a combination of a lot of different chemistries, I think. I know that’s quite a long-winded answer, but it’s a very complicated tapestry of trust and respect – and excitement, I think, for this thing that we get to create!

I love that in a lot of the verses, you’re playing with this tone that’s really prickly and bright, yet totally cuts through the mix. What are you doing to get that sound?
There’s a lot going on actually! I guess with the first record, it was a real sort of punk vibe with the guitar. That was my form of rebellion, in a way – stating myself as a guitarist and holding no prisoners. But now, it almost feels like I’m rebelling by softening the edges, and creating all these new textures – be that with an EBow or a pedal or something else. Going from the first record over to this one, it was about pushing all the tones and colours that it’s possible to get out of a guitar, and not just being this one-size-fits-all sort of spiky, edgy punk thing. It’s still got that edge, but I’m also pushing our sonic repertoire to new places.

I used a lot of the EBow on this record, just to create a lot of ambience and background tones, and some of the sounds that almost feel like strings. I recently got an American Pro Jazzmaster, too, which is responsible for a lot of the guitar sound on this record. I used mostly Burns guitars on the first one, but the range of sounds I can get with this new guitar… There’s just more depth, really, and using the EBow with it created a whole new space for me, sonically, in the way I could approach the layering with my parts.

Another big new thing was this pedal I got from Roland last year, the BOSS SY-300. It’s a guitar synthesiser pedal, and I’ve been using that a lot for this kind of spiky, spacey sound. “Hasta La Vista” is a prime example of that – almost this kind of plonky synthesiser sound – and with that pedal, it’s possible for me to play that part live at the same time as the main guitar part.

I think the big question for all of us was, “How can we broaden our sound and add new flavours to the mix, while still keeping this unit as much a live band as possible?” And for me, that meant asking, “How much can I do live? How much is it actually possible to play on the guitar itself?” So in a way, I’m treating the guitar on this record almost as an audio interface – it’s this panel to create other sounds with, not just that raw, kind of indie type sound that I think really defined the guitars on the first record.