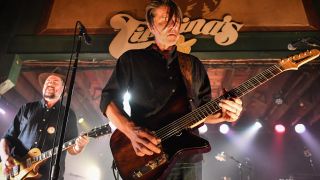 Drive-By Truckers have been a band for damn near 24 years now, and in that time they’ve solidified a place as a proper institution of the alt-country world. Throughout the turbulence of lineup changes and the trends that perpetually shift the sound of contemporary roots rock, the Athens, Georgia-bred outfit has always done one thing exceedingly well: craft honest, unapologetic, soulful and unfettered Southern-tinged rock music.

With their latest LP, The Unraveling, founding members, guitarists and songwriters Patterson Hood and Mike Cooley have brought their group back to the recorded form after three years away - the longest time the band has ever gone between releases.

“We just kept touring and the last record [2016’s American Band] remained relevant a lot longer than we expected it to - which is good for us, but not necessarily great for everything and everybody, considering its subject matter,” Cooley says. “But we were still enjoying playing that record live and we just decided to take our time about making new material.”

With American Band, the Truckers dealt fans an album that found its lyrical center in the deeply charged topics of gun reform, anger stirred by the unchecked violence of law enforcement and the censorship of art amid national tragedies.

American Band was sonically similar to much of the Truckers’ discography but was ideologically as punk-rock a record as could be - and the band’s most directly political to date. The Unraveling follows suit, tackling the political hellscape Americans have collectively experienced over the past few years and channeling that fury into a collection of some of the band’s most vital and emotionally charged songs.

Tracked at the legendary Sam Phillips Record Service in Memphis by producer David Barbe, the Truckers’ latest finds the band sticking to its tried-and-true sound and is built upon a foundation of Cooley and Wood’s intrinsically interwoven guitars, raunchy tones and clever arrangements. The Unraveling also features plenty of Cooley’s deft slide work.

“The songs we were writing just called for more lyrical-sounding playing and the more melodic, sustained type of slide guitar is a great way to get that,” he says. “I also think Patterson and I have gotten better at what we do over the years, but we still do very much the same thing we did when we first started playing together and realized we had a chemistry. It’s effortless and very organic for us.”