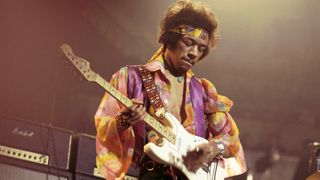 When Jimi Hendrix passed away nearly 50 years ago at 27, he left in his wake only three studio albums with The Jimi Hendrix Experience, live recordings capturing his set at the Monterey Pop Festival and his earth-shifting Woodstock performance, and a live album from his post-Experience trio, Band of Gypsys - recorded at the Fillmore East on New Year’s Eve of 1969 and New Year’s Day of 1970.

It’s hard to overstate how Hendrix’s scant discography fundamentally changed the way we approach the electric guitar - which is why it’s a truly monumental thing when unheard Hendrix music is released.

With the new box set Songs for Groovy Children: The Fillmore East Concerts, Hendrix fans will enjoy just such a gift in the form of all four complete sets from Band of Gypsys’ two debut gigs. That’s 43 tracks in their original set sequences and without edits crammed onto five CDs or eight vinyl LPs. This includes more than two dozen tracks that have never enjoyed a commercial release or have been remixed.

According to Band of Gypsys bassist and Hendrix’s former 101st Airborne Division peer Billy Cox, “These were very unique concerts. The audience felt what we were projecting to them. We felt that everything was cool and we were together with friends. It was just magical.”

Musically, those debut gigs marked a turning point for Hendrix’s music and offered a window into where the maverick musician was headed before his life was cut short. Band of Gypsys’ sole eponymous release boasted only six tunes but is a wildly influential record - particularly for the funk movement that flourished in the '70s.

Eddie Kramer - legendary producer, Hendrix’s sonic confidant and the man behind the intricate work of Songs for Groovy Children’s beautiful remix and remaster - spoke with Guitar World about the new box set and remembers Band of Gypsys.

What was it like revisiting those tapes all these years later?

"I had the first go at mixing it alongside Jimi himself in 1970 at Juggy Sound in New York. I recall Jimi had a particularly clear vision of what he wanted to hear from that project.

"The one thing that stands out in my mind is that we got to one of Buddy Miles’ [Band of Gypsys drums/vocals] improv episodes where he’s going off - yakking and improvising his vocals - and Buddy could be a bit much with that. I remember Jimi put his head down on the console goes, 'I wish Buddy would shut the fuck up, man!'

"There was only one Jimi Hendrix and I think one of the reasons why Jimi decided very soon after that mixing session that Band of Gypsys was not going to be a thing any more was that it was his band and he didn’t want anyone stealing his thunder."

"Buddy really was the right man for the job, though; his backbeat was so solid, it allowed Jimi a lot more freedom to do his thing. What Buddy brought to the table with a heavy backbeat and a great snare as a solid support mechanism was perfect. And when it was fitting, Buddy’s vocals were fabulous, necessary and really kept that mood going.

"When you jump forward to the end of Band of Gypsys and the Experience getting back together with Billy Cox on bass and Mitch Mitchell in the fold again, Mitch had obviously been studying and taking influence from Buddy Miles.

"There’s a famous quote of Mitch’s where he said, 'Buddy Miles, mate! He’s like a bloody cement mixer, isn’t he?!' And it’s true. Buddy was like a machine and that machine-like funk was such a big part of Band of Gypsys’ vibe."

Of all the unheard material from the debut Band of Gypsys gigs, what do you think will floor people the most?

"As you go through each show, it ebbs and flows. I’m not even going to try and pick out the best things from them as the listener has never heard all four shows remastered in the best way possible, which is an enjoyable proposition, but it can be a bit heavy at times! Think of all the wonderfully nuanced takes of Machine Gun you’ll have to listen to!"

What was the biggest challenge of getting these recordings up to your exacting standards?

"My workflow is a hybrid of the very best of the analog world - which keeps the vintage quality and warmth - and the best of the digital world. Modern technology has afforded me many more tools to extract the very best out of Jimi’s guitar or the ambience of the room, and that’s really critical.

"I’ve been using a device called a Burl Mothership for the last eight years when I transfer from tape to digital and it retains as much of the sound of the original tape as I can possibly get. So when I work on it in Pro Tools, I’m starting with a transfer that’s fairly difficult to hear the difference in compared to the original tape its pulled from.

What stands out most about Jimi Hendrix’s playing at that stage in his career to you?

"There’s a sense of spontaneity, and when things went wrong - especially a guy like Jimi - you’d play a wrong chord or something and laugh it off. He was tough on himself, but when Jimi made a mistake, he’d turn it into something cool! That’s the true test of a great artist."