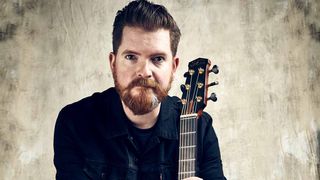 Back in March, John Smith was in the middle of an Australian tour when the country announced restrictions on mass gatherings due to the Coronavirus. Shortly after, he found himself on the first flight home to the soon-to-be-locked-down UK.

A little over a month later, however, and John had released his latest album, Live In Chester, and was set to embark upon a ‘virtual world tour’, a new landmark in his career so far…

Music has been part of John’s life from an early age. When he was only five or six he began playing the piano, then the drums. The guitar came a little later, entering his consciousness when he saw the movie Bill & Ted’s Bogus Journey around the age of 11. “That big guitar duel at the end blew my mind,” he laughs. “I thought, ‘Oh right, I’m going to have to start playing guitar!’”

John’s father worked in the record industry and played guitar himself so, noticing his son’s enthusiasm, bought him a red Squier Strat so he could have some most excellent musical adventures of his own. Since then John has gone on to tour the world armed with an enviable selection of Fylde acoustics, making albums along the way.

We were curious to join the dots between those early Squier Strat days, a love for traditional English songs and the effect that ‘working from home’ has had on an otherwise itinerant musician.

“I started listening to Hendrix, Clapton and, later on, Led Zeppelin,” John says. “My dad sat me down and played me Kashmir and that blew everything open. Suddenly I was obsessed with guitar and from about the age of 11 or 12 I was playing every day. Got home from school, played until I fell asleep.

“Then later in my teens I discovered Nick Drake, John Renbourn and Bert Jansch. That changed everything again. I became interested in alternative tunings and realised the possibilities of the guitar in a completely different way. As soon as you take your bottom E string down to a D, you’ve got a different instrument.

“Then you change them all, put them in one of Nick Drake’s strange tunings, and you’ve got a completely different experience. So I had this evolution as I was growing with the instrument and being steered by what I was listening to.

“By the time I was about 20, I was writing my own songs, trying to gig them and seeing what would happen if I played out in front of people. With mixed results…”

Did you go through the open mic experience, festivals and so on?

“I’d been playing open mics in Liverpool where I was living. Doing that every night for a couple of years, playing as much as I could, working four part-time jobs to pay the rent while I was just trying to make a go of music.

“I got a gig up at the Ullapool Guitar Festival. I’d sent them a demo and they offered me a fee. I did the gig, I looked at the cheque and then I looked at what I’d earned from my four part-time jobs in a week and I decided to go self-employed. Then I was skint for five years, but I was gigging and I’ve been touring ever since.

“In 2006, I was offered a spot opening for John Martyn to which I said, ‘Yes, please’. Then John took me on tour for the best part of two years. Right through his last UK tours I was opening for him. That gave me an opportunity to present myself on the touring circuit and say, ‘I’m opening for John Martyn, can I have a gig?’ and people would say, ‘Yes,’ and then I’d get festival slots. Then I got a proper manager and everything, sort of, rolled from there.”

After several successful albums, including 2017’s Headlong and the more recent Hummingbird, you were finding worldwide success and had a headline tour of the US in the diary, but then came lockdown. How have you fought back?

“I was just so lucky to have this live album ready to go. I basically mixed it and had it mastered thinking what I’d do is just press a few copies, maybe sell them at gigs, and it would just be a nice bit of merch. Not really realising that it would become this sort of security that it’s turned out to be.

“What I did in the end was print up a thousand and thought, ‘People want to go to gigs, they still want to have the communion of a live show, and this is an opportunity to give it to them.’

“I’d just been pulled out of my Australian tour – 12 days into a 24-day tour – I had get home as quickly as possible. And then my first headline US tour was gone, all my dates gone. I thought, you know, ‘I’m suddenly broke. How do I fix this?’”

You’ve been doing gigs online. How was that experience?

“After the first one, it felt like this is basically a virtual folk club. Everyone’s talking to each other. People are talking about gigs they’ve been to and reminiscing together and getting to know each other. That was the thing that blew me away the most – it was like a real community of music lovers. So suddenly it felt like, ‘Actually, you know, this is doable. People want this.’”

How did you get on with the technological aspects of performing online?

“Man, if it’s not made of wood and strings, I’m generally not entirely sure it’s gonna work! I just spent a lot of time in front of the computer researching and watching other people. Made a few mistakes, bought a few pieces of kit it turns out I don’t need… I just sat in front of YouTube for a few days and figured it out and it turned out I had everything I needed.

“I ended up using the camera on my laptop, I put all my instruments straight out of my pedalboard into my mixing desk and a USB out into my laptop. All my LR Baggs pickups go through my touring pedalboard, so it’s the same sounds that I put out on stage. So the guitar was DI’d into the pedalboard, through the mixer, into the laptop.”

“Yeah, absolutely. For a start I travel with British Airways so I can only take one guitar, but here I’ve got all my guitars around and so I can make it up as I go along and that was extremely refreshing. As you can imagine, it just enables you to go to different places with the songs.

“And just having my familiar totems around me, you know, all that junk that I’ve got in my office, I just felt so comfortable because I’m playing as freely and as openly as I would at home.

“I’m just noodling, but suddenly there’s all these people there and it just feels like it’s a very different way of communicating, compared with being on stage and having that implied fourth wall. You know, the formalities of the gig – none of that is there. And that kind of blew me away and I think people responded to it really well.”

“Back when there was still Hank’s Guitar Shop on Denmark Street. It was a Fylde Oberon and easily the best guitar I’d ever played, but it was a couple of thousand pounds too expensive for where I was at. As my friend and I were driving up to Glasgow to do one of the John Martyn gigs, I just stopped in at [the Fylde Guitar workshop in] Penrith.

“I looked up the address and I just stopped in. I introduced myself and Roger, sort of warily, said, ‘Right, do you want a guitar?’ I said, ‘Yes, but I can’t help but notice that you endorse a lot of older folk musicians. Why don’t you endorse someone younger? I’m out there opening for John Martyn, I think you should make me a guitar.’

“He regarded me with some suspicion and then he said, ‘Yes, all right.’ To his eternal credit, he built me an extraordinary guitar. Six months after that I was playing it at shows.”

That would be your Falstaff?

“That was my first Falstaff, with cedar and Madagascan [rosewood]. Four years after that, I was visiting Roger, bringing him a bottle of whisky, chatting. He said, ‘Try this,’ and he handed me a guitar that was similar to mine but with this really white piece of spruce on the top and Indian rosewood [back and sides].

“I played it and then five minutes later I was giving him my credit card. That guitar has now turned completely yellow and it’s ageing wonderfully. That’s the only time I’ve ever experienced that – played a guitar and gone, ‘I have to have this. There’s no other way.’”

What about your pedalboard?

“On the main ’board, a Schmidt Array 450, I’ve got a Lehle Acouswitch Junior for acoustic and electric signal paths. I use a Boss OC-3 that gives me a bit of reinforcement for when I’m doing solo shows and I want a bit of bass. The real magic pedal is the El Capistan, which is Strymon’s tape delay emulator, and that makes everything sound amazing. It’s the ‘sound better’ pedal.

“I’ve got the Strymon BlueSky, a beautiful and convincing plate reverb. I don’t use the hall or the spring, I just use the plate. I’ve also got a [Strymon] Flint on there for a little trem. The Flint is the closest thing I’ve found to a vintage Magnatone. On the electric side I sometimes dial in a Hudson Broadcast. I’ve no call for distortion in my gig, but every now and then a little grit is a good thing.”

“I use a TC Ditto [X2] for reverse/weird loops on one or two songs. I can’t do proper structured looping to save my life…”

John’s Schmidt Array 450 pedalboard: for his online gigs he takes a line out of the ’board into a mixing desk and straight into his laptop via USB – simples!

What about the future? How are you going about rescheduling your dates?

“Well, I’ve rescheduled my May dates to November and March, but I’m being realistic about November; I’m aware that it could not work out. If it doesn’t, I’ll do it next year. I’m keen not to be tone-deaf to the situation. So I’m not doing anything until at least November, but I may well be off the road for the rest of this year, in which case I’ll just have to go back to Australia in March and finish my tour.

“Man, it was going really well. That was the thing – I spent a little bit of time kind of grieving for that, too, because it was the most fun I’ve had on the road in such a long time. And then to be whisked out of it, was… yeah, painful.”

You must be looking forward to getting back out there…

“To quote Danny Thompson, who is one of the wisest men in music, I get paid for the travelling, doing the accounts and booking flights, but I do this bit for free. That’s how I consider it. When I’m in a plane or in a car, I’m thinking, ‘This is what I’m getting my day rate for.’ As soon as I’m up there on stage, it stops being a job.”