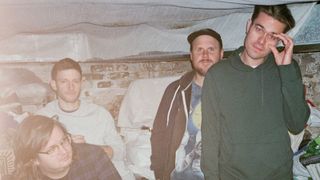 “I don’t know anything about music theory at all,” says Stefan Babcock, singer and rhythm guitarist of Toronto punk band PUP. This might surprise listeners. For three albums in a row, PUP have churned out some of the most consistently mature, theory-based music ever to be flown under the banner of punk.

On its face, Guilt Trip is one of the most complex punk songs in recent memory. Yet Babcock says he has no favorite guitarists and barely knows more than seven chords. “Most of the weird time signatures happen by accident,” he says. “It’s just me playing something I didn’t realize was in a weird time signature.”

“Stefan is so melodic, and a melody like that kind of has its own internal logic,” says Steve Sladkowski, PUP’s lead guitarist and the source of the band’s more boundary-pushing moments.

“There were just moments where we would be like, ‘Oh, yeah, that’s the complete statement,’ and then we’d turn around and it would be in 7 or strange combinations of 3/4 and 2/4.”

Take, for example, Bloody Mary, Kate and Ashley, from 2019’s Morbid Stuff. Counted in 11 (one measure of 6/4, followed by a measure of 5/4), the song lurches wildly, led first by Sladkowski’s angular arpeggios, then by Babcock’s crystalline verse melody, all before exploding into one of the band’s biggest choruses yet.

“That started off as a demo I recorded with guitar and vocals,” Babcock says. “It was another one of those situations where I just wrote around a melody and didn’t realize the timing was weird. It just sounds a little, like, drunken. Like kind of stumbling through something.”

Backed by a powerful rhythm section and one of the most original lead guitarists in punk (check out the solo on 2014’s Yukon), PUP’s songs grow and unfold when taken to the full band. To make the cut, they just have to pass one test first.

“The song has to sound awesome between the four of us,” Babcock says. “If the song doesn’t sound good with the four of us playing it at the jam space, it’s not a good song.”