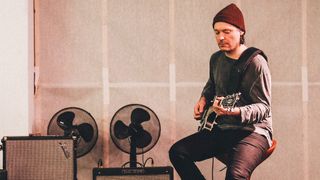 Sweden's long, cold winter is no joke. But Refused’s Kristofer Steen is literally laughing when he answers Guitar World’s call on a late November afternoon.

“The darkness has descended on Stockholm!” he gleefully exclaims. The guitarist’s surprisingly cheery disposition makes a bit more sense when you consider that Steen’s post-hardcore outfit has entered the grim season on a serious high note.

Refused’s fifth album, War Music, was released just a month ago and it’s a rager - packed with 10 politically charged, swaggering anthems of genre-bending punk. The new record has also elicited comparisons to Refused’s 1998 game-changer, The Shape of Punk to Come, on which the band weaved electronic, ambient and jazz elements into their adventurous hardcore sound.

“War Music was about finding our way back to our essence,” says Steen, “focusing on the aggression and intensity of the music. And just making it fun.”

Formed in the early '90s in Umeå, Sweden, Refused gained an international grassroots fanbase from their first two metallic hardcore releases - This Just Might Be the Truth and Songs to Fan the Flames of Discontent - before imploding in the middle of a US tour soon after dropping The Shape of Punk to Come.

But, thanks to that third record’s lasting and widespread impact, when Refused eventually reunited in 2012 the musicians found themselves playing their biggest shows ever at massive rock and pop festivals.

Their comeback album, Freedom, arrived in 2015, and while Steen is “very proud” of that effort, he also admits the approach - tracking in Hollywood with producers Nick Karl “Shellback” Schuster (Taylor Swift, Justin Timberlake) - ultimately resulted in a “slightly more mainstream” and “wishy washy” record.

War Music, on the other hand, is the sound of Steen and the band - vocalist Dennis Lyxzén, drummer David Sandström, bassist Magnus Flagge and guitarist Mattias Bärjed - unified in their assault and serving up their scathing critiques (against capitalism, neo-fascism and more) on a bed of stabbing power chords, funky grooves and pure punk fury.

But for Steen, War Music is also a study in inventive guitar playing and songcraft. While hints of Slayer riffs and Rage Against the Machine rhythms appear throughout War Music, the guitarist reveals he also drew inspiration from some distinctly non-hardcore sources, including funk-rock legend Nile Rogers (Damaged III), electro duo Daft Punk (A Violent Reaction), Swedish dance-pop artist Robyn (Malfire) and more. He even created a tongue-in-cheek Bon Jovi moment by sneaking in a “slightly cheesy” talkbox section on Blood Red.

“Staying in between genres is what we’re trying to do,” Steen tells us. “So we have to find a sound that works between the lines... that’s the trickiest thing.”

After testing many gear configurations, Steen discovered the simplest option was, in fact, the most versatile. “I had a Gibson SG [electric guitar] with [Seymour Duncan] JB pickups and a Fender Twin Reverb [amp] with a Boss [Turbo] Distortion pedal. That was it. You can get a lot out of just that.”