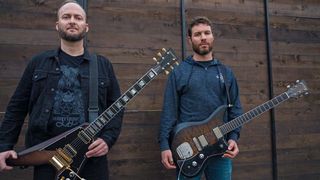 Part of the rock star dream is landing that hallowed endorsement deal, where your level of fame can no longer be denied and some big-name or boutique shop comes begging to custom-build your ideal axe. Sacha Dunable is now living that dream… kinda.

Dunable has achieved undeniable success as the guitarist and singer of prog-metal weirdos Intronaut, putting out a string of albums to a rabid cult of fans and scoring coveted touring spots with bands of the caliber of Mastodon. And he does have that hard-working luthier hard at work.

The bad news is that he’s pulling double duty; he is that hard-working luthier constructing the guitars of his dreams. Since 2011 he’s been cranking out quality instruments at (somewhat) reasonable prices.

On the phone, Dunable sounds somewhat exhausted and slightly worse for the wear. He’s had a long but fun few days showing off his wares to the hordes of gear fanatics at the Winter NAMM Show.

While he’s earned a break, there’s no rest for the wicked: this year, Intronaut released their sixth record, Fluid Existential Inversions, on Metal Blade. All this while Dunable Guitars is busier than ever; this year will be the first time they’re sold in Guitar Center.

It’s a long way from Dunable Guitars’ humble origins in a rented garage. The founder had spent years learning the ins and outs of guitars in repair shops, eventually graduating to teching for metal bands on the road.

He slowly put together a collection of tools and soon followed in the footsteps of Amazon, Google and Microsoft, maxing out a credit card and settling into a carport within which he would begin to build his empire.

“I started building more and more guitars for people and word caught on that way. he says. “By 2014 I had to quit all my other jobs to build guitars full time.”

Many musicians require second jobs to keep the rent paid, but Dunable has found that there’s a nice synergy between his onstage and offstage careers. Dunable guitars have found their ways into the hands of players like Ozzy Osbourne sideman Blasko and High on Fire bassist Jeff Matz.

His products have even shared the stage with Lady Gaga, courtesy of touring guitarist Tim Stewart.

“Intronaut had been out on the road playing with a ton of cool bands in 2005, so it sort of happened naturally that my buddies in these other bands would see me with a guitar and go, ‘What the hell is that thing?’ ‘Oh, I made it.’ ‘I want one, too!’” Dunable says. “It just really spread pretty naturally from there.”

Not that celebrity endorsements are necessarily needed to make Dunable gear appealing. Take the guitars: aside from the Asteroid model, which boasts a beautiful Flying V shape, the other three models vaguely hint at classic shapes filtered through a twisted imagination.

Squint hard at a Cyclops (heh) and the single-pickup base model might look something like a Les Paul Jr. Get a case of beer in you and you might mistake the R2 for an Explorer. The Yeti resembles something like the bastard child of an SG and a Tele Deluxe.

“Design-wise I’m a huge fan of '70s and '80s solidbody guitars. Anything from Fender to Guild to weird lawsuit stuff. But I also want to make something really comfortable and ergonomic.

“So we kinda tweak things and make sure everything’s going to be nice and balanced, basically going about making guitars I’d want to play personally. I don’t want to just be making clones; I want to be making guitars that are our own design.”

“There’s definitely a lot of different design elements I’ve drawn inspiration from,” he says. “I’ve never really given much thought to what I’m going for, I kind of just go with what I want to do in the moment. To me, it’s about looking good, being super comfortable and just sounding good.”

One thing that isn’t customizable is the scale: all guitars are 25.5 inch scale. “A guitar in that scale length just sounds better. It’s more resonant. The woods we choose, there’s nothing too out of the ordinary, but choosing the right mahogany or maple or swamp ash affects the playability, tone and feel of the guitar, which is what inspires you to pick it up and riff out.”

Many players have been finding that inspiration with Dunable; he says the company sold 300 units last year; not bad numbers for a small boutique shop where many of the components are handmade. “We make our own pickups, we do our own paints, it’s mostly done right here in California,” Dunable says.

Which brings us to the price. Base-model guitars range from $1,850 to $2,150, customizations even more. That kind of money isn’t something to sneeze at for most casual players, but it falls within “reasonable” for avid collectors or dedicated woodshedders.

Dunable says his philosophy on price is a result of his own history of Wayne’s World moments, staring at the high-end gear through a guitar store window, muttering, “It will be mine.”

“I could never afford a nice guitar or a new guitar,” he says. “I always bought used lower-end Gibsons like Les Paul Studios or Mexican Fenders. I didn’t want to price these things so that they’re out of reach for most people. I want people to play them and for them to be accessible to most. I wanted to give something that has a lot of value for the quality of the instrument you’re getting.”

He vouches for his gear in the most important way: Fluid Existential Inversions has all the hallmarks of great modern prog-metal, with dexterous high-gain riffs colliding with moody, atmospheric sections.

Almost all those sounds were made with gear designed and built by the band’s leader. “[For] this new album, I used a Dunable amp, Dunable guitars, even some Dunable pedals. I like stuff from other companies, too. We use Mesa amps or whatever — but guitar-wise it’s all Dunable.”

Building guitars and putting them to use on albums, then touring the world with some of the world’s best metal bands sounds like a guitar nut’s dream, but it’s a lot to balance.

Dunable is realistic about the possibility of having it all: he won’t be hitting the road in a van overloaded with bandmates and gear for half a year in the near future. Dunable Guitars’ success means Dunable the man has to pace himself, lest the quality of his music, his instruments and his state of mind suffer.

“Intronaut hasn’t really been active the last couple of years, which has been great and allowed me to focus on this business. But now going back into this cycle of having an album, we’re just trying to be reasonable about our expectations on what kind of time we can commit.

“We’re trying to find that balance of doing more fly-dates and weekends. I don’t know if I can ever do six one-month long tours in a year ever again. It keeps the touring and performing aspect done. We all won’t get burned out on it and it won’t burn me out on balancing getting work done while being out doing that stuff."