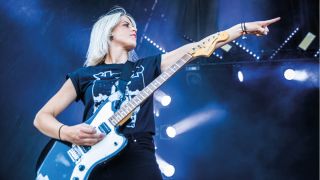 Fans and critics have called Konvent’s Puritan Masochism the doom metal highlight of 2020, an instant classic and/or pretty much everything in between.

The album, which the Copenhagen collective released via Napalm Records in January, is packed with disturbingly ominous riffs that underpin the genuinely unsettling, guttural vocals of singer Rikke Emilie List.

Below, we check in with guitarist Sara Nørregaard, who has some distinctly non-metal influences and a particularly not-Iommi-approved choice of axe.

Your choice of guitar, a Squier Jagmaster, is a bit unusual for metal, no?

"Yeah, it was my first guitar. I got it from my mom and I’ve never modified it. Normally I use a Peavey Valve King and a Laney GH100L and I split the guitar into both. For Puritan Masochism, I used a Mesa/Boogie and an Engl. I really want to get my own Engl amp. I’m ready for some sponsorship deals now if anybody wants to step up! [Laughs]

"For effects I have the reverb on the amp and an Ibanez Tube Screamer. It’s quite simple, really. I like to keep everything raw; having too many effects detracts from the power."

What got you started playing guitar?

"Primarily Nirvana, Red Hot Chili Peppers and classic rock. Once I got into the Danish metal underground I started to gravitate toward more extreme metal. I also love Lamb of God and Deftones. Obviously, Black Sabbath are always in the mix for influences when it comes to metal. But we never sat down in Konvent to decide what we’d play – it just seemed to develop itself."

Who comes up with the songs?

"Usually me and Heidi [Brink], our bass player, will come up with the riffs, and our drummer Julie [Simonsen] works out her parts really quickly. Rikke will come to rehearsals with her melody and lyrics already done. We’re fast workers and we’re always open to each other’s suggestions. We’ve already got songs prepared for the next album."

Did you always know Rikke had such a sinister voice?

No. She started taking lessons a few months before we started Konvent as she was curious how people got their voice to sound like that. My sister said she thought it was very scary when she heard our album. Of course, that’s a compliment for us.

Is the band a full-time job for you yet?

"We all still have to work regular jobs. We don’t play mainstream music; doom is not even as big as black and death metal in Denmark. I work in an office, but I can get time off when I need to.

"The people I work with think it’s so funny to see what I’m like out of work. They come to our shows and they’re really supportive. If Puritan Masochism does well, hopefully we can realize our dream of playing in a band for a living."