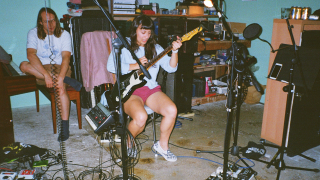 What’s your current go-to guitar?
A G&L Tribute Fallout. I’ve played it for a few years now. I wanted a guitar that was light and small, and I tried all the usual suspects but nothing really spoke to me. I think I can be a bit contrarian, and I liked the idea of having a guitar that not as many people did. I watched a few video reviews of the Fallout, and liked that it had both a P90 and a humbucker, which you could blend, and the blend has ended up being my go-to pickup setting. The first time I held one in a shop it just felt right, the neck felt smooth and well-made and the body was light and comfortable. And it was pretty cheap, too!

How did you initially fall in love with the instrument?
Growing up, there was a lil’ cheap nylon-string guitar in my house because my older sister learned it briefly. So when I signed up for lessons at my high school, that was the one I started on. The lessons were a good start, but I started to progress more when I started looking up tabs for my favourite songs on the internet. I started busking with my best friend, and that was a great incentive to learn a lot more. I think that’s what made me love the guitar – I could enjoy the songs I loved in a hands-on way, without having to be an expert or virtuoso.

What inspires you as a player?
I find Courtney Barnett’s playing very inspiring – the way she really takes charge of the instrument, playing with both delicacy and chaos. It’s really expressive and I’d love to be able to play like that.

Are you much of a gear nerd?
Only a little. I bought a nice MXR Carbon Copy delay last year, and previously I was playing [a delay pedal] I picked up for ten quid so it was quite a step up. The other five pedals on my board are all distortions or fuzzes. I love the Proco Rat that I pinched from Jonathan [Pearce, also in The Beths]. When we’re at home, we play on NZ vintage Jansen amps, which sound so great – even if they are a pain to lug around.

Do you have any ‘white whales’?
Oh man, while recording our new record, we borrowed a friend’s guitar – a single‑cut Jerry Jones guitar that’s basically a Danelectro copy, but so, so smooth and lovely to play. It had such beautiful clean bell tones, was in tune up the neck… The perfect sparkly-jangle machine. I didn’t want to give it back!

What would your signature model look like?
It would be small and light. The rest I suppose I’d have to work out by trial and error. I personally would love if it was easier to switch between pickups
mid‑song – mid-strum, even! So I’d work on that. Then maybe all the fret dots are small dogs.

If you could jam with any guitarist, dead or alive...
I would love to just get wasted by Freddie Green at playing in time. Just destroyed. That would be incredible.